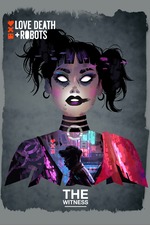 Film reviews in 22 sentences (or less)
Today: The Witness

Hi everybody, break the vicious circle - this episode is the stylish variant of a punk neo noir short film, which is wonderfully bizarre and definitely knows how to convince with its optics. Definitely the episode with the most bare skin and the most explicit sex representation of the entire anthology series.

When we think about the word Cyberpunk, this is what we imagine. Skyhigh buildings that only give an idea where the sky used to be which is now nothing more than a distant symbol of freedom. And the animation quality is just otherworldly, literally, they created a never-before-seen aesthetic. The look is so visceral and organic that it's a feast for the eyes. We really thought of "The Mitchell vs the Machines" with the use of motion capturing, but the realistic vibes were in fact "just" hand-drawn... amazing! No wonder why the comic-like style with "bangs" and "booms" is reminiscent of "Spider-Man: Into the Spider-verse", the spanish director and art designer Alberto Mielgo also worked on the stunning animation and style of the perhaps best Spiderman film besides "Spider-Man 2". It's just fun to watch what happens in the next few seconds, who's waiting around the next corner? And you start to keep your fingers crossed, for whom? That is entirely up to the audience, see for yourself.

The story reminds of "Rear Window" if Jimmy Stewart would have been able to run like in "Run Lola Run" with the song of Post Malone in his ears: "Run away, but we're running in circles - Run away, run away."