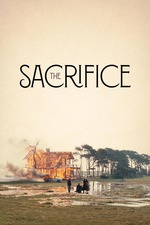 Film reviews in 22 sentences (or less)
Today: The Sacrifice

„Andrei Tarkovsky's swansong about the meaning of life, death and the unquantifiable price of sacrifices captured in what seems to be a film by Ingmar Bergman.”
(The Two Cineasts)

Hi everybody, Tarkovsky's works are indeed limited in quantity, but all the more rich in scope and with the last film of the renowned director (and our favorite one of all time) the audience is again sucked into a spiritually exhilarating cinematic poem somewhere between understanding a deeper sense in our world and questioning on a metaphorical level everything we think to see - an interpretationen waits behind every object or scenery.

We hold Tarkovsky in very high esteem because he connected film, philosophy, poetry and art in general, invited us to witness war from a children's point of view, demonstrated the meaning of art, brought us closer to ourselves by exploring the unknown, built bridges between past, present and future mirroring experiences, lead us through a philosophical microcosm of nature, invaded our deepest feelings and earliest memories and now tries to come to the core of our very existence.

Tarkovsky always offers rich and lasting composition with his common methods like the use of water in every imaginable way, fire, the shifting of colors and every time he lets his protagonist look at the camera and speak to us we get goosebumps all over the place. Just as in Mirror or Nostalgia is the lead character another time a stand in for Tarkovsky himself, his known views of our nature and its destruction, the creation of art, faith God's plan and mankind's evolution, all captured in beautiful yet haunting images that unfold slowly to framed image of visual poetry. Tarkovsky casts a spell on us with uncountable close-ups and just 112 long takes, planned scenes that manage without many cuts to suck it in and be a part of what seems to be a stage play, perhaps the most theatrical "Tarkovsky."

The idea that a sacrifice also is a gift to others is portrayed by our protagonist who feels truly alive for the first time in his dreary existence by preparing to bring the greatest sacrifice there is and therefore giving his life a meaning. Sacrifice forces us to look at our own life, evaluate the meaning of existence, life and death, faith and terror are the premise of the film that works with a lot of mystery. A disaster is announced and Tarkovsky doesn't even care to tell us what it is, it simply isn't important, he develops an unhurried plot with eerie music a certain disconnection of the reality outside of the house and a deeper sense, a more expressionistic touch with every dialogue and shot.
Similar to Stalker, Tarkovsky doesn't need to show us or explain us explicitly what has happened, the mind forms its own interpretation so that at the end, everyone can enjoy these eye opening events with his/her translation taking his/her time - these narratives demand our attention but create a uniquely emotional response.

Sacrifice is a tribute to one of his favorite directors, Ingmar Bergman (even filming on "Bergman's Island") and feels to be more European than any other Tarkovsky film before, a mixture of a philosophical and religious study by Bergman and an "end of the world" trope. Even the dialogues and the acting are highly reminiscent of Bergman's masterpieces, the changing style of Tarkovsky is absolutely refreshing and leaves me with even more grief for his early death.