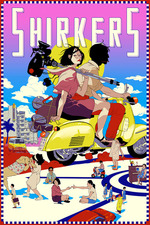 truly one of the most extraordinary films i've seen this year.

i love that the device driving much of the story was the empty vessel of a bland, talentless, insecure older white man. it kind of feels like one of those anecdotal twitter threads where women are brought together because their boyfriend is cheating on all of them.

but the rest, obviously, transcends all of that. i forget that the older you get, the more you're leaving behind. there's no proof that you were there, you sat there in the restaurant, you walked through that park, you had a laugh with a friend at that cafe. there's photos, video, and audio for sandi and her friends, but it's really not enough. it wasn't in time. this film grieves the loss of what could have been if shirkers had panned out, but then realizes it did pan out. it panned out how it was supposed to.

there is a fullness to seeing them scratch around at their pasts because they've travelled the distance. there's this glory of juxtaposed shots of where shirkers was and where that moved on from it, in place and in character. the film they made together was reaching so damn hard that the reaching itself was noble.

something so genuinely made by women so young will only come off as admirable to me.

and god! so punk. the collage style of this film felt like one of those nights where i flipped through rookie yearbooks until 4am when i was 15.