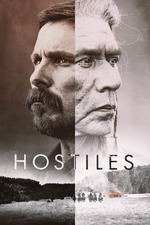 "If you do it enough, you get used to it. Doesn't mean a thing."
"That's what I'm afraid of."
The fear of numbness of humanity is one of the most prominent themes brought to life in Scott Cooper's western drama "Hostiles". Characters throughout the film grapple with the ethics of the treatment of Native Americans in the late 1800's - elevated by dedicated performances by Christian Bale, Rosamund Pike, and Wes Studi, and beautifully realized cinematography.

"Hostiles" tells the story of renowned Army Captain Joseph Blocker (Bale) and his journey to return a dying Cheyenne war chief (Studi) back to his home in Montana. Along the way, they meet the recently widowed Rosalie Quaid (Pike) who joins them in their journey through the harsh landscapes of pre-20th century America. Confronted with physical opposition from Comanche Natives and emotional opposition from within themselves, the group travels vigilantly together as they learn about each other and even more about themselves - although they'd be the last ones to admit it.

The film's thesis is exemplified by the juxtaposition between Captain Joe and the Cheyenne chief; two men who are (by definition of the times) inherently enemies. Through their journey, Captain Joe begins to learn that the beauty and evil natures of humans are not dependent on race or skin color, but by a human's resolve and moral build. Cooper allows the audience to subscribe to Joe's frame of mind by refusing to hold back on the gruesome realities of race-relations of the time. In other words, Cooper subjects us to the hard truths of history, in order to shine a brighter light on the real truths of humanity. Christian Bale gives his most raw performance to date - completely unhinged in his beliefs and equally bound by his pride, until he allows himself to accept the spectrum of human morality. Accompanied by fantastic support performances by Rosamund Pike, Wes Studi, Ben Foster, Jesse Simmons, and the always captivating Timothée Chalamet, Cooper continues to prove his masterful skill on directing a strong ensemble.

Carefully captured by the masterful cinematography, the American landscapes between Arizona and Montana are sensitively shown to contribute to the films idea that beauty and terror can (and do) live together, interwoven.

Held together by Scott Cooper's careful vision, Bale's (and a handful of ensemble actor's) performances, and beautifully seized cinematography, "Hostiles" tells a beautiful and important tale, that only suffers from its slow-burn pace within the last act of the film. Cooper suggests a concern for a numbness within humanity, and - if received properly - perhaps offers a route to conversation, and solutions.