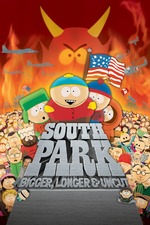 Who would’ve thought that an adult cartoon would be become so successful and so popular could have an extremely large fan base? All thanks to 2 men with wild imaginations and creative minds! Not to mention that this would go on to have its own film from 1999. Ladies and gents, this is the review of South Park: Bigger, Longer, & Uncut!

South Park: Bigger, Longer, & Uncut is based on the infamous show from Comedy Central, and it follows Stan, Kyle, Kenny, and Cartman as they witness their parents declaring war on Canada after they snuck into an R-rated movie starring their foul mouthed role models, Terrence and Phillip.

This film is the greatest “fuck you” to censorship, the FCC, the Bible-thumping Christians, and the jackass parents I’ve seen in my life! I’ve been watching and learning a lot of stuff from South Park all of my life, and if I didn’t have any critical thinking, learned any logic or even have a sense of humor, I’d probably wouldn’t be who I am today. But anyways, I’ve seen it multiple times when I was a little boy, and this around the time when my uncle introduced me to South Park at a younger age. For a boy who came from a religious household, I had awesome parents who loved me and cared for me. But like most concerned parents, they didn’t want me watching adult cartoons. And at the same time, they weren’t Bible-thumpers who would force religion down people’s throats. But anyways when I was a kid, I never stopped watching it. It was constantly playing in my head over and over again, and I wanted to watch it again and never turn it off.

Here’s why this film is number 1: The film has awesome characters played by 2 awesome actors, and it’s creative team. Trey Parker and Matt Stone are such a creative team! It’s awesome to watch them have such a creative minds and put together satisfying satire on a lot of topics that goes on in America. South Park isn’t like a bunch of random shit being thrown into every single episode that doesn’t make any sense, or just be disgusting or over the top without having a good pacing or following a good story for the episodes. Sure there’s some bad South Park episodes, but that’s beside the point. These 2 guys know how to make classic episodes, hilarious moments, and awesome original and catchy songs!

This is what comedy should be at its finest! Yes the film uses profanity and sexual humor nonstop, and shows over the top images through sex or violence. But it was done with eloquence and sagacity. Not just throwing a lot of disgusting or disturbing things after another for the sake of it. Like for example, Sausage Party could’ve been funnier if it toned down some of the profanity instead of cartoon characters saying “shit” or “fuck” throughout the whole movie. But instead, they tried to make it funny with throwing a bunch of racial stereotypes or perverted dialogue without a message or any hint of subtlety. And that’s just lazy writing!

South Park: Bigger, Longer, & Uncut is one of my favorite animated films of all time, sitting with Toy Story, Shrek, Monsters’ Inc., The Lion King, and Batman Beyond: Return of the Joker. Just like any South Park fan, I will never get tired of watching this movie again and again! It’s impossible to hate or bash this, because it was ahead of its time, especially when South Park was about to come to an end in 1999. It’s also weird knowing that the film earned an Oscar nomination for Best Original Song, but it lost the award to Tarzan. But you know what? This film is too good for the Oscars. The film is the definition of a classic movie based on an original series, and definitely treats its fans right with a classic and hilarious masterpiece!