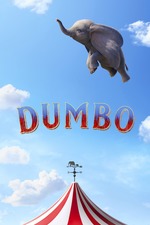 If there's one thing that I felt watching this film, it's that this film had heart. There's a sense of childlike whimsy that came over me when I saw the circus scenes especially, they're a delight to see.

I'm not gonna lie, there's quite a bit wrong with this film. The script is a little uneven tonally, and some of the acting, by the kids especially, is not all that great. That being said, you're able to kinda forget about some of those flaws when you see the film in action. Danny Elfman's score is also fantastic, as is Arcade Fire's rendition of Baby Mine.

Dumbo isn't a must see film, but it's one that captures the imagination. I don't have much else to say other than it's a fun film, and I had a great time seeing it in theaters.