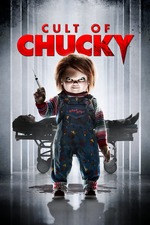 Chucky is one of the best Universal Monsters ever, and one of the hardest to kill. The Chucky franchise has more in common with the 30's/40's runs of Frankenstein or Dracula than the 80's slasher boom which initially birthed Charles Lee Ray. After what seemed like an initial demise, Chucky returned by folding in the high camp undertones of James Whale only to go dormant again, coming back for a third incarnation which allowed for tense slasher vibes to flourish in gothic single-location settings, using the entirety of the Chucky Mythos but wearing it lightly, and creating a formidable horror hero in Nica Pierce. Although not intentional, the continued survival of these characters through the expansion and contraction of their universe, is an argument against endless restarts to horror franchises, the desire to wipe out the past only to retell the initial campfire story slightly differently. In doing so, what is lost is the depth of continuties to draw from, to build and create narrative parallels. Redundancy and repetition is not an inherent negative. That said, Curse Of Chucky and Cult Of Chucky form a unit within the Chucky-verse just as Bride and Seed or the initial three do. It isn't necessary to immerse oneself in the entirety of the franchise to enjoy them, but they also are not a series of stand-alone films the way say F13 mostly is, where Jason returns essential anew each time, from a slightly different starting place. So the Cult Of Chucky grows ever on.

Once there has been an Old Dark Maybe-Definitely-Haunted House, the logical place to set your franchise is an Isolated Psychiatric Hospital full of damaged people whose testimony to the presence of a serial-killer-possessed Good Guy Doll will be assumed to be even less accurate than someone not finding themselves in such an environment, an environment they cannot leave by choice, especially if it is remote and snowy and they have other issues to deal with besides! Cult Of Chucky might be the closest we get to a semi-abstract tone-poem in the Chucky Cycle, concerned more with human behavior in the face of the uncanny than the hacking and slashing whose arrival is a given. Chucky and Cohort being beyond singular consciousness, beyond death, represent something which cannot be destroyed or abated, let alone described, through normative means. Just because consciousness may require a physical substrate does not mean it is limited to a singular, finite instance, nor does it necessarily depend upon there being others to witness and reaffirm its being. This makes Chucky as an entity really scary. What IS Chucky anyway? I mean, sure it could be said that Chucky is the soul of a 1980's serial killer preserved within the body of a 1980's mass-market anthropomorphic toy but after being banished and having its home destroyed over and over and reincarnated over and over in the Chucky form, could it not be said that the human entity Charles Lee Ray was a necessary element along with the Good Guy line and the magickal processes required to bind and fuse them into an entirely new being, something which had never existed before, just as Frankenstein's Monster was composed of the bodies of many and the brain of a killer, infused with the power of lightning. This makes Chucky frightening, at least to me. How does one stop Chucky? How does one destroy something that is the slasher in the age of mechanical reproduction? What are Chucky's motives? They used to be to leave doll form and enter the body of a human in order to continue a potentially immortal reign of serial killer terror, and then it was to have a partner and a family so as not to be alone, but what does Chucky want now? Outside of personal attachment or grudges born against individuals or their relations, is Chucky just there, stranded on earth indefinitely? Whatever moves Chucky to do things, as a permanent member of the Cult I am always happy to see what Chucky does next. Army Of Chucky??? I can only hope! <3