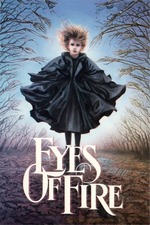 In 1983 I was obsessed with folk-horror that would come on the cable tv and on faerie lore available at the local library. Eyes Of Fire was made for me then. I would put out offerings to the fae in our yard in flower-cups and leaf-plates. If they accepted my offerings, I hope they knew it was in good faith, even if it might not have been what they wanted or would ask for themselves.

To feel an animate presence in the land, in a specific place, something alive, something which speaks to you, which welcomes you or warns you off, something that has been there long before you set foot upon it, under or around all of the asphalt and the concrete and the sewer lines and electrical currents it is still there, changed perhaps, weakened or made more powerful, pleased or angered by our actions, by our refusal to listen. Our culture treats land and that which lives within it and upon it as something which can be segmented and sold off, something which can be abstracted and pulled apart for its component resources. The literal consequence of this is the total annihilation of all life on earth, on the earth's ability to support itself and all that dwell within it. Would it not show to us its eyes of fire, its most terrifying visage, in an effort to make us stop, to get us to leave it be, to leave it alone? Would it not resort to whatever means at its own disposal, even if those means threatened itself? Human civilization carries with it it own helper-spirits, those which can be dealt with, can be offered boons or small sacrifices for the protection and maintenance of the built world. All of them, and all of this still lives in and around us and with us, for and against us. Instead of thinking of human civilization in terms of conflict within and upon where it dwells and whom it dwells within and alongside, might not there be a way to recognize the harm we have done, and come to an honoring, a reckoning, an offering and reconciliation with those we have injured or destroyed and find a new path of love and care.

Since the 1990's, 10% of all remaining wilderness has been destroyed. We have lost forever that which we did not even know was there to be lost. Having projected a blankness, an anxiety, a homogeneous terror upon the woods, we never bothered to learn what it might have called itself and what it might have wanted us to call it.