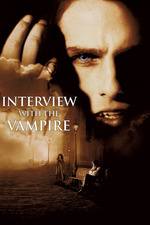 Tom Cruise draining a rat into a glass like an upside-down Capri Sun is one of the best things to ever happen in a movie. I had read this book when I was in junior high school but the movie had always escaped me. What a mistake! The heat from the Cruise/Pitt romance is palpable, like a glowing fireplace, irradiating the screen. Like Death and the Maiden, if the Maiden was Brad Pitt. Tom completely inhabits the role of Lestat. For one of the first times in his career, he seems free, open and expansive in manner. Neil Jordan knows how to rock a Monster Dinner Party Period Piece and this is the jam - a midpoint between the fairytale theatre of 'The Company of Wolves' and the Hammer Modernism of 'Byzantium'. I am old and disheveled and somewhat (?) portly now, but had I seen 'Interview With A Vampire' at 20, I would have wanted to wear each and every one of these outfits. Moreover, it would have been a film to live in, to inhabit. This is one of its chief triumphs, and one it shares with the best vampire films: a fictional space of enchantment to reside within. It perfectly captures the Rococo Decadence of the Anne Rice novel. I can't think of someone who could have done it better than Neil Jordan. Walerian Borowczyk? Maybe! But I haven't seen those movies yet! One image after another presents itself to memory: Brad Pitt drinking poodles. Brad Pitt in the dovecote. Tom Cruise flipping out between bored dandyism and injured rage, his eyes wild, or Tom, again, dancing with a plague corpse. It must be said that Brad Pitt's self-hating vampire act doesn't do him or the movie any favors ultimately, but Tom is beyond radiant, the real Sun King of Vampires. In all honesty, if Tom Cruise's Lestat wanted to eat/drink me, I would be so down for that as a means of death. Kirsten Dunst has such a cute little coffin in this movie! and is quite excellent as the forever-child vampire Claudia, a performance which is a fascinating combination of bloodlust and ennui. Her arrival on the scene also creates a fascinating analogue for the intentional model of family-making presented by gay love and child adoption, still somewhat controversial at the multiplex in 1994. The movieps pacing does bog down a little in the second half or so once it switches out Tom's house-on-fire energies for Brad's new Continental almost-boyfriend Antonio Banderas, but has bonkers silent-movie/Grand Guignol Stephen Rea to nearly make up for it. 'Interview With A Vampire' is my #2 Vampire Movie of the 1990's, behind Coppola's 'Dracula', but these represent a peak for the genre from 1992-1994 that it hadn't seen since the 1970's, and has never approached since. Stan Winston's effects have not dulled with time, but have become even more beautiful, both visceral and restrained. Elliot Goldenthal's score is magisterial and sweeping, bold and forceful in its movement. I am probably the only person who is as big a Vampire and Tom Cruise fan as myself who has waited over 20 years to watch this movie, but I am so glad I finally have!

PS - I really dig it when Vampire Movies put vampires on sailing vessels and also when they cause them to be pulled in carriages drawn by horses with feathery tiaras, and this Vampire Movie is no exception!