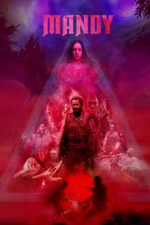 Mandy was someone who had been through some shit, some horrible shit and she came out scarred but alive, able to read and draw and dream and sleep and get high and listen to metal. Life was difficult and heavy but finally possible. She had someone who she loved and could live with. Her trauma was subsiding and becoming integrated into her daily life. Her nightmares at night weren't quite as bad anymore. Only once or twice a month now would she wake up, sheets clenched in her fist, having to get up and go to the bathroom and smoke a bowl staring out into the rainy night, having to collect herself before going back to bed and getting through the next day at the shop on little sleep, grouchy and tired and irritable.

I am someone, a real someone, who needed Mandy to live, who needed her life, her escape from mortal peril, from a living death, to be there and to be real and not extinguished and gathered into a waiting, pulsing vacuum of performative male frustration, rage and grief.

Mandy, whose name graces this film, is there to be literally erased, to be wiped away, to become a void filled with stage blood, mauve lighting, references to past tantrums, freakouts rendered stale through repetition, dick measuring, ascending a grand allegorical pyramid to masturbatory enlightenment.

Mandy the movie only has use to glorify cishet domestic arrangements. Polyamorous or queer characters are decadent, depraved and a threat to hetero coupledom, to be dispatched righteously after they have themselves dispatched the fat and the dumb.

Mandy the movie is about male power measured against male power. In a world in which all real life has been vanquished and excised, referentless allegory makes one glorious, a wizard, a true star, an alchemist, a seer

Mandy, the woman who dreamt and drew and slept and got high and read, I wanted to see how she lived, how she fought, how her days and nights were spent in joy or in tears or in quiet contemplation.

I found no home, no purchase in this film. Not only was it aggressively not for me, it invited me in, sat me down, gave me tea, kicked me out of the house and burnt the house down while I watched in tears, wandering off to play with the half-burnt Masters Of The Universe action figures it saved from the fire, and not even any good ones, but, like Master-Of-Arms, and like, the evil, blue He-Man clone that Skeletor made.

This movie hurt to watch. The star is for Mandy herself. All the hearts.

PS: The best Motley Crue album is Too Fast For Love and Generation Swine and, ok. Dr. Feelgood.

PPS: This is a movie that makes a tiger on psychedelics not only bored, but boring. The worst kind of designer drugs. HRT > LSD

Thanks to everyone who ever read anything I ever wrote here. Love To All Of You <3 <3 <3 nathaxnne