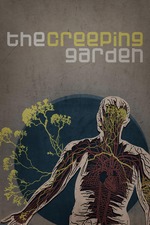 In the late 1970's, maybe even into the very early 1980's, one of my favorite pastimes was to sit down in front of the television and watch documentaries about biological life at its frontiers, at the fuzzy borders of what was then known and unknown, a place where plant intelligence and perception, the functioning of outer space bodies, the behavioral patterns of bigfeet, whale & dolphin song, alien civilizations, microbiological systems, ESP, reincarnation, all seemed amenable to study with a gentle and patient sense of wonder, a lack of judgement, woozy synthesizer scoring and astonishing computer-driven simulations of complex processes. There was both a reverence and an excitement, an awareness of being on the cusp of knowledge, and of knowing as a good in and of itself, with the possibility that that knowledge would soon be able to transform not only what we knew of life, but how we lived it.

The Creeping Garden, with its woob/Jim O'Rourke BBC-Radiophonic-Celebrating music and its larger musings on what slime moulds can tell us about pattern and behavior and cognition along with just hanging out with them in wild and domesticated environments calls powerfully to that earlier me, still in that place, back when there was a future to be in a constant state of expectation of, in a readiness of awe, if not awe itself.

The person that I am, my dad used to call an 'oh, wow!', which he meant pejoratively, as in someone who passively took in stimuli, had their minds and peripheral nervous systems blown and responded to with an 'oh, wow' or maybe later, a 'whoah'. I never understood why that was bad and I am still that person. It is possible that I am fundamentally dull and incurious. I am that person who is more than happy to watch hours and hours of time-lapsed slime-mould footage as they pulse and ooze and feel and think and decide and groove in their space set to spacy whooshing and bleeping and reverbed sound and I will totally be like 'right on, slime-mould dudes!'. The Creeping Garden is not about people like me.

The Creeping Garden is about people who want to make friends with slime moulds, interact with them, make art and music with them, film them and taxonomize them, find out why and how they do things and build mecha vehicles for them to be inside and drive around as well as robot heads to translate slime mould states into semi-human expression. I am so glad these people exist. I mean, I am not entirely dumb, or at least I didn't use to be, and whatever I used to know about cellular automata recognizes how slime moulds use simple algorithms to engage in very complex behaviours and I am like 'whoah' but the persistence and desire and drive these naturalists and scientists and artists have to communicate, to be along with the slime moulds remind me so much of watching The Secret Life Of Plants or John C. Lily documentaries when I was little that I am overcome with that feeling that maybe there can be a future, not only for humans, but for us all, a future where we can learn to be with each other in ever-complex ways, richer and stranger than we ever thought possible. <3 nathaxnne