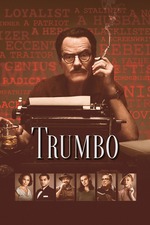 In a way it is admirable to make a film like this in the current climate. The popular consciousness has lost the idea that maybe it's bad to blacklist people you disagree with. I'm afraid the point is made so obliquely and stupidly that it will have no effect whatsoever.

As my good old friend Henry used to say, "The trouble with fighting for human freedom is that one spends most of one's time defending scoundrels. For it is against scoundrels that oppressive laws are first aimed, and oppression must be stopped at the beginning if it is to be stopped at all." Dalton Trumbo was a scoundrel like few others.

Trumbo's politics were indefensible. So indefensible in fact, that the film does not even try to offer a defense and instead opts to simply hide every negative aspect about him. This is no biopic, it is a fictional hagiography. Before it defends him, it makes him out to be an angel. In fact even that is not enough: the writer had to create an entirely fictional character and give him cancer to generate sympathy!

But this destroys the entire fucking point. If Trumbo is just a nice, funny guy, who believes in sharing his lunch with hungry people, then defending him is easy. Trivial. For the film to succeed it needed to portray him in the worst possible light, and ONLY THEN come to his defense. Doing so would not have been difficult.

He wasn't a communist in the abstract sense, in the "that sounds like a great idea" sense -- he was an all-out Stalinist. This is a man who was against US intervention in WW2 as long as the Soviets were allied with the Nazis! During and after the war he wrote many propaganda articles in defense of Stalin, helping to cover up atrocities in eastern Europe, or attempting to discredit the facts about oppression and mass murder in the USSR. As late as 1956 he called Stalin "one of the democratic leaders of the world". He was also a hypocrite of the highest order, as he himself had orchestrated a blacklist preventing films from being made because they did not align with his ideology! He used his influence to stop movies being made from the books of James T. Farrell, Victor Kravchenko, Arthur Koestler, and even Leon Trotsky.

In fact his distaste for freedom of speech went to absurd levels. Here in his own words, he blames free speech for the holocaust:

>It is difficult to support your belief in the “inalienable right of man’s mind to be exposed to any thought whatsoever, however intolerable that thought might be to anyone else.” Frequently such a right encroaches upon the right of others to their lives. It was this “inalienable” right in Fascist countries which directly resulted in the slaughter of five million Jews.

Yet this film puts the words "It shouldn't be to anyone's political standard" in his mouth! How? Why?

They even got Bryan fucking Cranston to play him, who better to play an anti-hero?!

So: if the film had portrayed Trumbo as he really was, and then championed his rights and railed against the blacklist, that would've been ballsy. But this is pure garbage.