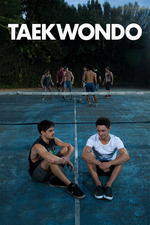 Glancing, winking, touching, touching and then talking, a lot. The birth of desire, there before our eyes, is what the directors of Taekwondo proposes to us. Rarely has a film given me this feeling of sexual tension between several men. Without ever being believed, the bodies are filmed, framed like a pure temptation. It is often beautiful, sometimes a little long but never boring. And the end is particularly successful.