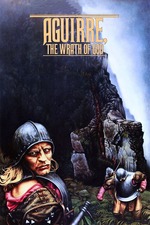 ☆"Together, we shall rule this entire continent. We shall endure. I am the Wrath of God... who else is with me?"☆

Breathtaking. There is simply no question that Francis Ford Coppola was inspired by this masterpiece before his own maddening trek to film Apocalypse Now.

Werner Herzog's astonishing historical adventure film Aguirre, der Zorn Gottes ["Aguirre, the Wrath of God"] was the first of the German filmmaker's legendary tempestuous collaborations with actor Klaus Kinski. In a picture that manages to be both expansive and minimalist, this hallucinatory journey remains a soul-shaking work of art.

Kinski stars as the titular Don Lope de Aguirre, part of a group of Spanish conquistadors in January 1561 searching for the lost city of El Dorado within the Amazon rainforest. Gonzalo Pizarro (Alejandro Repullés) first commands the huge group of Spanish militia and Indian slaves from the newly-conquered Incan Empire. With dwindling supplies, a smaller group of 40 or so is chosen, led by Don Pedro de Ursúa (Ruy Guerra) and Aguirre second-in-command to scout ahead and return in a week to report their findings. In this garrison is also a priest, a nobleman, and nervous soldiers and natives. Pizarro reluctantly allows two women to accompany them: Ursúa's mistress Doña Inés (Helena Rojo), and Aguirre's teenage daughter Flores (Cecilia Rivera). When a terrible accident traps one of the rafts and the men are discovered killed, the first sign of discord appears: Ursúa wishes for proper burials, but Aguirre simply blows them up to get rid of the bodies. Shortly thereafter, when Ursúa says it's time to head back as their journey seems futile, Aguirre leads a bloody mutiny. His increasingly brutal command commences in search of gold and glory.

While a fictionalized story, Aguirre is surely historically accurate to a fault, based on the conquistadors who indeed did futilely search for El Dorado. The screenplay, written by Herzog, was unthinkably ambitious even in its straightforward narrative: a God-fearing group searches for gold amidst a jungle, and slowly its leader is driven mad.

But while the story is excellent, what you'll remember are the visual and auditory elements. "You had to go there," Herzog says on the film commentary, to Peru and the Amazon that is. The movie begins with an iconic scene of literally hundreds of people descending the mountains adjacent to Machu Picchu, followed by significant stretches of filming on the tributaries of the Amazon in the Ucayali region. Thomas Mauch's cinematography is god-tier, free-flowing around the rafts, moving in sync with Herzog as he directed. There is a rhythmic intensity that builds as Aguirre himself descends into madness; claustrophobic and dizzying as the doomed raft floats into the heart of darkness.

Just as iconic is the score, one that is instantly unforgettable, by keyboardist Florian Fricke, the mostly-one-man-band of Popol Vuh. The krautrock/progressive group scored several of Herzog's pictures but this is surely for what he will be remembered most. Haunting and ethereal, alternating between dreamlike and nightmarish, like the film itself it is almost overwhelming in its surreal presentation. As the lines of reality and fantasy blend, the score contributes to the unease and pervasive disquiet which will envelop the title character by the finale.

A descent into the mouth of hell, Aguirre, the Wrath of God is a cinematic fever dream, epic adventure, and one-man revisionist history of the demonic possession which drove the New World's demented pursuit of the Old World's demise. Absolutely magnificent, a spellbinding trip to certain death.

Added to My Subjective List of the Best Narrative Films.
Added to Werner Herzog ranked.