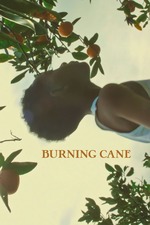 ☆"When you got the Devil on your back, you oughtta just stay still, let him do as he pleases. 'Cause once he's done, find a cleaver for your throat, because the Lord has seen your treason."☆

What were you doing when you were 17? Probably not what Phillip Youmans is doing, that is, making an Independent Spirit Award-nominated picture. The now-19-year-old (enjoy it kid, it's all downhill from here) is up for the coveted John Cassavetes Award this year -- presented to the creative team of a film budgeted at less than $500,000 -- for his debut feature, Burning Cane, notably also nominated for Wendell Pierce's acting performance.

The 41st -- and final, it appears -- film nominated for the Spirit Awards that I'll be able to see this year is a bleak, mature, and minimalist piece of art that paints a unique portrait of the black religious experience in Bayou country. At just 77 minutes, much is found in this pensive picture that's about twisted faith and toxic masculinity.

Helen Wayne (Karen Kaia Livers) is a profoundly devout Baptist and loving mother in rural Louisiana. Unfortunately she's facing severe challenges with her son, 30-something Daniel (Dominique McClellan), an alcoholic who never seems to know his potential, and lives in the shadow of his hardworking deceased father and war veteran older brother. He has a young son himself named Jeremiah (Braelyn Kelly), with whom he struggles to connect and guide while wasting away at home, unemployed. The Baptist minister of their community, Pastor Tillman (Pierce), holds a powerful presence over his congregation. An alcoholic as well, his position of authority is unchallenged despite his flaws, and despite his increasingly angry outbursts at women in the church especially. It's clear his wife's passing hurt him deeply. Through occasional narration by Helen, done in deep thought or memories, we follow what becomes a meditation on faith and how many compromise what values they claim to espouse.

Burning Cane is not an easy film to grasp. It's purposefully abstract, almost like this more depressing narrative version of RaMell Ross' Oscar-nominated documentary Hale Country This Morning, This Evening. Even using the word "narrative" feels like a stretch, as this is a film of loosely connected moments and thoughts which form a look at how much a woman will take from the toxic men she feels compelled to assist.

Firstly, Pierce is just excellent as the hypocritic pastor drinking his life away, volatile in his moments of clarity at the pulpit but crippled by his addiction and grief. His only control comes as a Baptist leader with a grip on his congregation, where his sermon rouses the small crowd and cements his adoration. And yet...

Youmans pulls off many duties here in his first feature: director, co-producer, writer, co-editor, and cinematographer. (Again, what were you doing at 17?) Much praise for his directing and shooting, as he almost uses the camera as a third objective person in each scene, at times peering from around corners and at times in full close-up. Some decry the "shaky cam" look of Burning Cane, but I feel it provided more authenticity.

As an editor and screenwriter? Youmans has a ways to go. Some cuts are brutally abrupt, distractingly so, and what passes as the script is meandering for scenes and devoid of nuance at other exposition-heavy moments. Those will improve as, you know, this filmmaker enters his third decade of life. I admire his vision and uncompromising allegorical drama.

But overall I found this intimate film quite an achievement, a tortured look at what Youmans himself called "the dangers of enacting and following a fundamental interpretation of religion, and...[leaders with] seemingly infallible status to the congregation." A startling if challenging first movie.

It's interesting how, about a decade ago, another filmmaker released his debut indie picture on a small budget, which also happens to be about toxic masculinity, religious hypocrisy, and violent family dynamics. Yet this director who finished the work just around his 20th birthday, Xavier Dolan, was heralded universally by cinephiles the world over.

I wonder what possibly could be the difference between these two young men? If only I could see it.