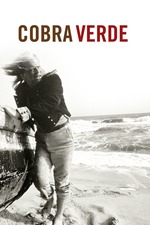 ☆"I long to go forth from here to another world."☆

Two hundred naked Amazonian women fighting with machetes in Dahomey. If I had a nickel for every time I'd seen that in a film, well...

The fifth and final collaboration of the legendarily adversarial pair of Werner Herzog and Klaus Kinski, 1987's Cobra Verde -- also known as "Slave Coast" -- is the least seen and least appreciated of all those works. But I posit it's more than just a goal of completionists, and in fact deserves far more acclaim.

And frankly, Kinski's performance both while cameras were on or off is so wild that it is worth finding out if the stories of his behavior were really true. They led to, among other things, the cinematographer walking out of production.

Kinski stars as Francisco Manoel da Silva, known as "Cobra Verde," or "Green Snake." It is the 1880s in Brazil, and da Silva is tired of working for a man who is financially exploiting him, he murders the man and sets out on the lam, a vicious bandit on the Brazilian sertão. While making a name for himself, he helps take down a runaway slave, drawing the interest of rich sugar baron Dom Octávio Coutinho (José Lewgoy), trader of cane, molasses, and rum. Coutinho doesn't know that this is Cobra Verde himself, the notorious outlaw, so he hires him as an overseer on his plantation. Naturally, Cobra gonna Cobra, so he impregnates all three of his daughters in short time. As a punishment of sorts, he is sent to Africa to control the slave trade there, one of the last major slave ports in the world but which has fallen dormant. "Not one single white man has come back from there in years," one of Coutinho's peers claims. So, da Silva goes to work on the west coast with King Bossa Ahadee of Dahomey (His Honour the Omanhene Nana Agyefi Kwame II of Nsein). But how much longer can an internationally condemned practice flourish?

Kinski is in full-on crazy mode here, looking like Vigo the Carpathian from Ghostbusters II. It's all part of the plan for this story, based on the novel The Viceroy of Ouidah by Bruce Chatwin, historical fiction but not an inaccurate one when it comes to the tortured history of Brazilian labor before the 20th Century. As well, the novel is loosely based on a real person, Francisco Félix de Sousa, who played a major role in the political upheaval in Dahomey around that time.

Herzog's adapted screenplay, though, leans into lots of historical inaccuracies for the sake of dramatic tension, and for letting Kinski have a wild and maniacal character. Those inaccuracies aren't those of tone or place at all, with miraculous cinematography and art direction of both Brazil and Ghana. That cinematography, first shot by the longtime Herzog friend Thomas Mauch, suddenly threw the entire production in doubt when Mauch and Kinski came to blows. Mauch quit, and Herzog scrambled to find a genial DP to replace him. He settled on a Czech, Viktor Ruzicka, and if there are differences in how Cobra Verde was shot between the two men, I can't see them. It's all so beautifully done, especially a completely amazing final act. It takes some time to get there, as the world-building from Herzog moves slowly, but culminates in some incredible dichotomy of the sublime and the murderous. It's a breathtaking finale.

Combined with another majestic score by Popol Vuh, and literally hundreds of extras and cast members costumed and designed by Gisela Storch, especially the second half of this film -- despite the strange story -- is totally mesmerizing.

Werner Herzog would later say, about his epic bouts with Klaus Kinski, that it was not antagonistic. There ain't no beef, Herzog claimed: "People think we had a love-hate relationship. Well, I did not love him, nor did I hate him. We had mutual respect for each other, even as we both planned each other's murder." Later this afternoon I will watch the film Herzog made about that relationship, a tribute to his f(r)iend, My Best Fiend. Sadly, Kinski wouldn't get to see it; he died in 1991.