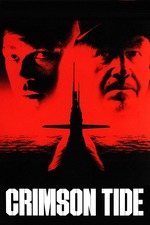 🐱Andrew Has Company for the Weekend!🐱’s review published on Letterboxd:

☆"We’re here to preserve democracy, not to practice it."☆

Director Tony Scott and actor Denzel Washington teamed up a bunch of times in the late 90s and 2000s, notably in the silly but fun Unstoppable, the clunky sci-fi Déjà Vu, and my favorite Scott movie Man on Fire. But the first time the two men got together was back in 1995, with the submarine thriller Crimson Tide, also starring Gene Hackman and many other recognizable faces.

One of those R-rated films I'd never have been able to see when I was 12, for some reason I just never got around to it. Realizing now that it's still quite well-regarded among action fans and sub aficionados -- a formidable group to be sure, cross them and they will give you das boot -- I had to check it out this afternoon on a day of catching up with Denzel.

We begin by hearing a news report on Chechnya and an uprising against Russia with U.S. involvement, and a horrific development: a nuclear missile base has been taken over by ultra-nationalists, sparking a geopolitical crisis. The commanding officer of the USS Alabama Captain Frank Ramsey (Hackman) -- a ballistic missile submarine assigned to patrol and prepare for pre-emptive strike -- chooses executive officer as Lieutenant Commander Ron Hunter (Washington), with some consternation as he like most younger men has no combat experience. The dangers of nuclear warfare seem real, with Defcon-4 initiated. Ramsey assembles his crew -- Chief of the Boat Walters (George Dzundza), communications officer Lieutenant Roy Zimmer (Matt Craven), weapons officer Lieutenant Peter Ince (Viggo Mortensen), and supplies officer Lieutenant Bobby Dougherty (James Gandolfini) -- and immediately Ramsey's tough impulsive action contradicts with Hunter's analytical and calm approach, which comes to the fore upon an Emergency Action Message received about an impending launch by the Russians. Immediately after, a second message begins to be transmitted but is cut off by an attacking Russian sub. We have reached Defcon-2. What follows is a tense exchange and battle of wits between the two commanders and whether nuclear action will indeed be taken, despite unclear evidence of an imminent threat.

That's a little longer summary than I usually like to give, but it feels appropriate to note the key figures and the rising tension leading to the central theme of, well, to steal the name of another Denzel film, courage under fire. This clash of wills and nature of warfare comes from an original screenplay by Michael Schiffer (and famously with writing help from an uncredited Quentin Tarantino), but one with some historical parallels to a real incident during the 1962 Cuban Missile Crisis: one on a Soviet submarine, with Washington's character modeled after Vasily Arkhipov, who many say prevented a global nuclear war with his calmness and rationality under pressure. Perhaps it's a little a shame that we get virtually no Russian perspective in this story, but that's no surprise.

Here in this film, Scott directs with an urgency that does not relent. Some of that comes easy for a war movie taking place inside a submarine of course, with the tightly packed atmosphere and chaotic tension, enhanced by a debate on chain of command and following orders. The pace is fast -- maybe a little too fast, as we come to "impending launch" much more quickly than you'd think -- but does well to mimic the real isolation and sure horror of knowing that one command's actions could literally determine the fate of humankind. Sure, it's exaggerated, but nothing feels unrealistic, if that dichotomy makes sense.

It's heightened with a Grammy-winning score by Hans Zimmer, leading orchestra and choir combined with synthesizer sounds. It's excellent in a very 90s way, and really drives the heart-pounding action.

Even the technical elements are good, accurately capturing the claustrophobic sub and the anxiety of the ocean deep. Well earned Oscar nominations for editing, sound mixing, and sound editing. Interestingly, the U.S. Navy was at first on board but then relented as they realized the themes of mutiny and questioning military leadership. So, I don't quote Wikipedia much, but this is such a great tidbit that I had to emphasize it:

Because of the U.S. Navy's refusal to cooperate with the filming, the production company was unable to secure footage of a submarine submerging. After checking to make sure there was no law against filming naval vessels, the producers waited at the submarine base at Pearl Harbor until a submarine put to sea. After a submarine (coincidentally, the real USS Alabama) left port, they pursued it in a boat and helicopter, filming as they went. They continued to do so until it submerged, giving them the footage they needed to incorporate into the film.

All in all, though still much pro-military than I ever like a movie to be, Crimson Tide really succeeds not just with pulsing action and drama, but ultimately from the two leading stars battling wits and wartime philosophies. So you've got top-notch acting paired with big thrills, a winning combination. You and your dad will like this one.

Though this little note at the end of the film doesn't make me feel a whole lot better: "As of January 1996, primary authority and ability to fire nuclear missiles will no longer rest with U.S. submarine commanders. Principal control will reside with the President of the United States."