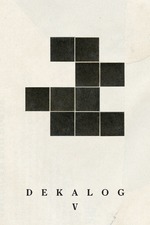 ☆"But in whose name does the law exact revenge?"☆

Perhaps the most well-known of all the entries in the series, Dekalog: V was expanded into the acclaimed picture A Short Film About Killing, which I watched a year and a half ago. (Oddly, the feature film was released before the television episode.) I think I'll watch it again after finishing this series, with this segment naturally on the simple Fifth Commandment: "Thou shalt not kill."

A young drifter named Jacek (Mirosław Baka) brutally and inexplicably murders a cab driver (Jan Tesarz) outside of Warsaw, in the drab olive-colored denatured outskirts of the city. Told in a frame story by the lawyer Piotr (Krzysztof Globisz) who represented him such as to try to avoid the death penalty -- to which he is morally opposed -- we witness the build-up, the crime, the attempted defense, and the ultimate verdict. Piotr gives his thoughts on the case and on the criminal justice system of Poland, and punitive judgment at large.

Stylistically, this fifth part of the miniseries could not look or feel more different than its predecessors. With cinematographer Sławomir Idziak, who also framed the first of the Three Colors trilogy Blue -- he continued in a Hollywood career, shooting pictures like Gattaca, Black Hawk Down, and even one of the Harry Potter movies -- green and yellow and brown permeate the film with a hue signifying mud and filth and, well, ugliness.

Also, of all of the portions of this series so far, the fifth is one where spoilers really don't seem to matter as it's fine to know what happens here. (I still won't spell it all out.) Nevertheless, the gripping story is best experienced instead of read, as it is filmed and acted with such precision and skill that no writing could fully describe it.

You're sure that the film is going to focus on capital murder and capital punishment. That's clear. But the way in which Kieślowski and co-writer Krzysztof Piesiewicz pull you into the moral dilemma of state-sponsored killing as an effective deterrent for crime, and Piotr's inner conflict with such an outcome, are exceptional. That the lawyer's eloquent and brilliant argument (which we don't get to hear) is even recognized by the chief judge, yet dismissed as fruitless. When convinced you are right, but your words and actions have no consequence to rectify literally an upcoming execution… well, the worlds of psychological ping-pong this unfolds are innumerable.

It's well-known my antipathy to the Bible and its false moral codes. Notably in that aforementioned edict it's explicitly told: "Thou shalt not kill." Of course, within literally the same book and those following it, God himself gives many many reasons why killing is just fine, even expected, even to be praised, even to be done no matter what, swiftly and dispassionately. The god who condones murder by vengeful horde, or angry father, or righteous government is no god of mine. Nor should he be of yours.

Paul Coates wrote that this Dekalog entry is "Kieślowski's vision of man-made hell." As long as states and religions also codify retributive murders into law, we're still living in one.