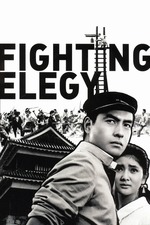 ☆"Kiroku! When did you take up with these rowdies?!"☆

I have many big omissions in my cinematic repertoire I'm trying to rectify, despite having seen 4200+ films. And though I've taken the time to see the most acclaimed films of Akira Kurosawa and a few from Masaki Kobayashi, but there are many more from Japan that I need to get to. Let's start rectifying that today with chipping away at my stacked DVR recordings, beginning with Seijun Suzuki's Fighting Elegy.

Catholic Japanese teen Kiroku Nanbu (Hideki Takahashi) attends a military school in 1935 Okayama. His repressed upbringing and conservative religion have metastasized into acting out, inappropriate thoughts, and unpredictable violence; Catholic guilt at times has a strong hold on him, and other times his faith makes him resolute. In his boarding house, he's hopelessly in love with his landlady's daughter Michiko (Junko Asano). Kiroku find guidance under the tutelage of Turtle (Yûsuke Kawazu), who helps him channel his energy into "the secrets of fighting" and training regimen for discipline and focus, also guides him to a school gang called the OSMS. With wanton violence and peer pressure, Kiroku feels deeply into the pits of toxic masculinity while he believes it impresses Michiko, and instead this sneaky satire has us witness the birth of a fascist.

Yukio Mishima may have a recruit in young directionless Kiroku, who -- though he claims to have a grounded faith to guide him -- teeters on a complete loss of control. Based on a novel by Takashi Suzuki and adapted for the screen by Kaneto Shindō, Suzuki takes a satiric and sometimes even light-hearted tone for a serious subject, the loss of innocence of the Japanese youth and ennui of the 1930s that may have led to the nation's imperialist march towards war.

Scenes of violence and martial arts are filmed in idiosyncratic ways with heightened style, with a slightly comic slant. I watched and loved Suzuki's wild Yakuza film Tokyo Drifter before, so I'm familiar with his unique take of masculinity and its place in Japanese society. Fighting Elegy, while at times losing that singular focus, takes it five times further with outlandish and subversively hilarious takes. Battle scenes are scored with brass horns and jazzy interludes. One man yells at school leadership then roller skates down the hallway. Dozens of men crowd onto trucks, jump off for confrontation, and jump back in/on like a clown car. Poetry and writings openly comment on abstaining from masturbating and instead getting into gang fights.

In an essay for the Criterion Collection, Tony Rayns discusses the tone and background of the film, writing in part:

[I]t goes where no film before had gone in search of comic insights into the adolescent male mind. It’s set in the mid-1930s, at the precise moment when militarism consolidated its grip on the imagination of young Japanese men—a moment, therefore, that fuelled the country’s imperialist ambitions in East Asia and ultimately led to the Pacific War. To look back at that time from 1966 was to raise unresolved issues of nationalism and Japanese identity, issues still as relevant to many young people as to those of Suzuki’s generation who had been conscripted to fight.

Kiroku is at once in a military school, yet in a gang that deems itself even more strict while advocating rebellion against the rules there. There's a cartoonishly simple outlook of the men here, never once stepping back to see the ridiculousness of their behavior and to where it may lead. It's easy to see how young aimless minds can be warped by toxic leadership.

Apparently hamstrung by a low budget from the production company, Suzuki's use of blazing color in Tokyo Drifter is nowhere to be found in the black and white filming of Fighting Elegy, with cinematography by Kenji Hagiwara. Still, light and shadow are used prominently, with white purposefully bleaching scenes to as to make them hazy and dreamlike.

The movie is wildly incongruous, but highly entertaining. Flashing from extreme closeups to wide takes, Suzuki throws everything but the kitchen sink into this crazy satire of the Japanese mindset of male power and privilege. It doesn't all work, but it's a bonkers good time. One of the most unique voices in the nation's 20th Century cinema, he surely is worth seeking out for a change of pace.