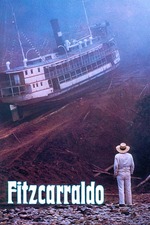 ☆"It's only the dreamers who move mountains."☆

Of the whole collection of Werner Herzog films I have, this is the only one I've actually watched before. The problem is -- and I think I've talked with a few of you about this elsewhere -- sometimes you need some more tools to evaluate a film properly. And frankly, when I saw Fitzcarraldo many years ago, for some reason as I wasn't really even "into" movies like I am today, I thought it was great but not spectacular.

I'm here tonight to take that back. This is another magnificent film from one of my favorite directors.

I won't post a traditional review like usual, since this isn't a new film to me. But I have to make some comments on this challenging and exquisite movie.

It's interesting how this compares to so many other Herzog works. Yes sure, it is classically without a doubt one of his films. And it features once again Klaus Kinski in another eccentric and maniacal role, stunning cinematography by Thomas Mauch, and a story of a man defying convention and conformity.

But the differences are stark, most notably to me the far longer runtime. So many of Herzog's other movies are much shorter, from the narrative to documentary features. Recall that his immaculate epic Aguirre, the Wrath of God is only about 90 minutes, and his masterful Lessons of Darkness is actually less than an hour. Here, Fitzcarraldo lasts for more than two-and-a-half hours. Also, while other Herzogian films are driven nearly entirely from dynamic performances and location filming, this one is best remembered of course for the herculean task that the titular figure undergoes in his Amazonian trek and the unthinkable challenge of staging such a ludicrous act.

Much like the movie itself, for the few of you who haven't seen it, it's best not to reveal that. I had completely forgotten how well Herzog holds back that secret for so long, nearly two-thirds of the way into the picture, finally it's made clear just how Fitzcarraldo is going to achieve that dream. Like the filmmaker himself, it is unique and the stuff of legend; also, it is dangerous and batshit crazy.

Additionally, as a documentary lover, I'd be remiss if I didn't recommend -- only after seeing this film -- Les Blank's masterpiece detailing the harrowing and bewildering production of it all, Burden of Dreams, the best movie about making a movie ever made.