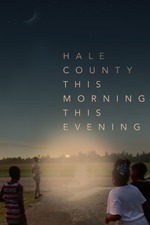 ☆”What is the orbit of our dreaming?”☆

RaMell Ross -- in his directing, writing, producing, editing, and cinematography debut -- brings to audiences a contemplative and pensive study of the American South vis-a-vis one Alabama county, in his Oscar-nominated documentary Hale County This Morning, This Evening, which you can watch thanks to PBS and its Independent Lens series hopefully on their website soon. (UPDATE: They did! Click on this link and donate to your local public broadcasting station please. SECOND UPDATE: It was only for a limited time. But you can purchase it through the PBS website.) It premiered tonight on traditional television.

Ethereal and at times meandering, much like a long summer's day in Alabama, the film abstractly follows several families and individuals throughout Hale County in the majority-black population. It's both a fitting and deliberately off-centered portrait to be seen during Black History Month here in America, with fleeting shots of wandering children and lingering cinematic pans cotton fields each seeming completely complementary.

In the film, viewers are immersed into the black experience -- with its historical dichotomies of hope and pessimism, talent and lack of opportunity, individualism and marginalization -- which in some ways has remained similar for decades in this area of the country, plus or minus a few 21st Century changes. Music echoes in the night. Children play. “Taking it one day at a time.” Job to job and how to make ends meet.

In terms of the socioeconomic picture, this is not a film of pity. I was drawn to the realistic and objective look at the families here, much like the equally impressive documentary from a few years ago -- albeit one of a largely white impoverished community -- Rich Hill. One may also think of the legend Frederick Wiseman, but his films are so staunchly objective that any sense of artistic flair or larger insight can sometimes disappear.

Here, RaMell Ross is a true auteur. His cinematography and editing are masterful, five years in the making and 1,300 hours of footage captured, to envelop the audience in the smallest of details and the grandest of landscapes of the South. Or, as Ross has stated of one of the purposes of the film, “to chart the visual story of blackness.” He has also said he wishes “to instantiate a way of looking.” At what, for whom? Perhaps through what, within whom.

And just when you're struggling perhaps to find a story here, linear as it may be but punctuated with detours and a constantly refocusing lens (literally and figuratively), a horrific tragedy befalls a family, one not unlike a tragedy that many other families of color have faced at a significantly higher rate than others. Some will call it a statistic, but to this community it’s another dream deferred as a dream never begun.

Through it all, some diversions and some life-changing realities, Hale County carries on. This morning, the sun rises, and so does the spirit of these communities. This evening, the sun sets, and the people are filled with thanksgiving. Billie Holiday, play us out.

A brilliant debut by a filmmaker for whom the sky is truly the limit.