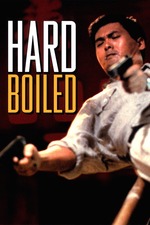 Ha, holy shit, that was great!

I didn't think I would, but I had tons of fun watching John Woo's The Killer a year and a half ago, a gift from my similarly-named friend Andrew W. I'm not always into these wildly over-the-top action bonanzas, but I'm delighted that I gave that one a shot.

Well then here we are tonight, with the next Daily Mosh Film Club pick, Woo's early 90s acclaimed Hong Kong crime thriller, Hard Boiled, for many the cream of the crop and the apex of the genre. Violent, stylish, brazen, and darkly comic, this unforgettably original film absolutely knocked me upside the head.

Inspector "Tequila" Yuen (Chow Yun-fat) and Benny Mak (Bowie Lam), Royal Hong Kong cops on the beat, attempt to infiltrate a gang in a teahouse. When a deal going down gets blown by a rival gang, a huge shoutout commences, resulting in many thugs killed but also Benny's death. Tequila coldly executes the gangster who shot Benny, at which his superintendent Pang (Philip Chan) is extremely upset, as that man was going to testify.

Meanwhile, an assassin named Alan (Tony Leung Chiu-Wai) kills a subordinate for crossing a Triad boss and siding with a violent newcomer Johnny Wong (Anthony Wong). Wong is actually impressed by his cold-blooded skill and asks Alan to help in a raid on a major drug warehouse, where a battle takes the lives of many on both sides. Detective Tequila is there as well, encountering the dangerous Alan -- who spared his life, somehow; Pang confirms though that Alan in fact is working undercover. The two will team up, along with Tequila's cop girlfriend Teresa Chang (Teresa Mo), to take down the sadistic Johnny Wong.

Woo finally turns to a picture that, instead of allegedly glamorizing gangs and criminals like some accused him for years, leans into a Dirty Harry type of narrative where a pissed off but well-intentioned cop is the hero. His final Hong Kong film before transitioning to Hollywood sees him -- in a script originally by Barry Wong, who died before completion -- go absolutely all out at every opportunity and unload the clip over and over with reckless abandon. Deliriously choreographed mania, fully automatic gunfire leaping through the air, slow-motion explosions and blood splatter, some slick martial arts moves to spice it up, a bodycount in the hundreds by the third act.

But there's more to Hard Boiled then just shoot-em-up nonsense, as there's actually a pretty intricate plot to follow that takes some time to embrace. More than most action thrillers and gangland stories, you might even need to know some social and political context about the setting and time period. Art Institute of Chicago's director of the Film Center Barbara Scharres explains:

Understanding something of the unsettled state of Hong Kong then—where the public mood with regard to the future after 1997 fluctuated between an unfounded giddy optimism and abject fear—is part of the key to unlocking the richness and complexity of the metaphors that Woo employs in Hard Boiled. So is realizing the difference between Hong Kong’s surface, an intensely law-abiding city where gun ownership is strictly prohibited, and its underworld, where fortunes are said to be made in arms sales, and where the gangster Triads infiltrate every industry, including the film industry, allegedly in league with powerful cities in mainland China.

It's hard not to compare this film with The Killer, and I think one obvious tone difference is that Hard Boiled has something of a sense of detachment to the violent chaos, an apathetic resignation to current states despite being on the "right" side and having a plan in action. Sure, Alan and Tequila team up, but each feels screwed: Alan by his countless dirty deeds undercover, and Tequila by a sense of disposable nature to the state. As Scharres points out too, scene after scene -- in-between and even during the epic gun battles -- uses a "metaphysical strategy of posing a series of lines to be crossed, each involving honor, loyalty or simple human decency." Loads of gray areas and moral ambiguities, two themes I love in action films which often have a difficult time finding a balance between fun and meaningful, and Hard Boiled does it so well.

If you can forgive a little goofy acting by some of the supporting players and some incomplete plot points surely a result of rewrites and painful edits to cut down to around a two-hour movie, this is as good of a crime thriller as you can get, with some of the wildest make-you-wanna-rewind-that-shit shootouts ever filmed. Absolutely fantastic.

Added to My Subjective List of the Best Narrative Films.
Added to John Woo ranked.