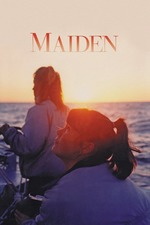 TIFF darling Maiden is a thrilling ride on the high seas, a decades-old story brought to the big screen with new life, an inspirational tale of female empowerment in a sport dominated by men.

Tracy Edwards took charge of the first all-female crew to race in the Whitbread yacht competition to sail around the world, a 30,000 mile trip. Three years of preparation putting together a team of twelve women, against all odds where of the hundreds of sailors only a handful were female in the rest of the boats, the Maiden was seen as a novelty human interest story while the women sailing truly believed they could win. Through treacherous conditions, and a disappointing first leg sailing to Uruguay from England, the crew turned it on to incredible feats, shocking the racing community by winning and winning over thousands of fans. Soon, it became clear they might actually win the entire race for their yacht class.

Directed by Alec Holmes, using footage filmed by Jo Gooding in a bit of accidental cinematography -- if you haven't yet, please enjoy Jack Moulton's fantastic interview with her for Letterboxd -- the movie unfolds like a Hollywood sports drama with all the twists all obstacles that a veteran screenwriter would implement. Instead, of course, this all really happened, and the footage is simply extraordinary to see the documenting of a crew on the open ocean for one hundred and sixty-seven days. The scope of those feats, sailing for half a year and filming for half a year, should both be lauded.

And though it seems clichéd to call a sports documentary about achievement and historic firsts as uplifting, it's true, and the ending in particular will give you goosebumps. Just an emotional climax and soaring pathos. What a thrill!

To be picky, as someone who doesn't know anything about sailing a yacht even after watching a 90-minute film about sailing a yacht, I still don't. I'd have liked, honestly, more explanation on the roles of each crew member and the technical elements of the race. In other sporting documentaries that cover lesser-known events, there's nothing wrong with taking time to explain particulars. (See 9-Man or Murderball for good examples of films that do this.) There's not much of that here at all.

I won't let that little quibble spoil what's otherwise an extraordinary journey and film. Maiden is a must-see on the big screen if you can. A thrilling adventure that also will give bring you to chills and tears.

Added to The Best Documentary Films of 2019.