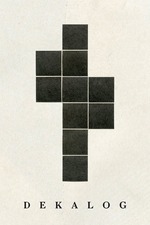 Ha, what a great last line to the entire film set.

So, some thoughts on The Decalogue as a whole, something of a macro-analysis after viewing all ten parts in a few days of the mammoth cinematic achievement of Krzysztof Kieślowski, the giant of Polish film.

First, a rating. This is the quintessential example of a work that is so much more than the sum of its parts. Though I only rated two of the films -- the first and fifth which many regard as the pinnacles -- with five stars, as a whole this entire series is a masterpiece without question. The subtle intertwining of lives, the dilemmas so personal yet often unable to be hidden, the vast emotional depths which resonate, the moral quandaries branching and taking root… all of it adds to 572 minutes of existential genius.

Film studies professor Annette Insdorf, in an excellent half-hour analysis of the series that comes as an extra on the Criterion Collection set, has some thoughts I can't possibly replicate. But I will bring out an important point she made: we're invited to make connections here, like the Commandments have connections, and though we see a continuity of narrative there, "there is a cumulative meaning" as we watch them all together. It can be opaque, it can be out of reach, but we feel that thread even if it's loose or slight. I tried not to consciously think about that in every segment, but it came through often.

Roger Ebert wrote a pretty good review of The Dekalog, in which he describes more about that overarching theme that Kieślowski sews:

[He] deliberately avoided everyday facts of life in Poland because he thought they were a distraction--the rules, the laws, the shortages, the bureaucracy. He deals with those parts of life that are universal….At the end you see that the Commandments work not like science but like art; they are instructions for how to paint a worthy portrait with our lives.

I also need to pay homage and great respect to Paul Coates, who I quoted in every review. In his huge Criterion piece entitled "'And So On': Kieślowski's Dekalog and the Metaphysics of the Everyday," his unreal knowledge of the scope of the film was invaluable to me. I hadn't quoted from it directly much, just other capsules of episodes, but I'll do so now.

On the common element of a trio of characters boiling down to a conflict between two:

The reality that emerges is one of lone figures who come to relate excessively to one another, inevitably suffering disillusionment, anger, even despair. In such a relationship, where only one other is “significant,” the temptation to demand of that person, idolatrously, what only God can supply may be all but irresistible, particularly if unconscious….It is as if the characters seek God unconsciously by outraging his commands, seeking to compel him to respond.

On the larger cultural issues and distinctly Polish oeuvre:

At the same time, reducing relations to degree zero creates a zone within which the everyday can gravitate toward the metaphysical. Each twosome balances community’s near disappearance with the possibility of its rebooting from this nucleus. Significantly, each film was originally to have plucked a face from a crowd, but the focus on an apartment block, whose windows may or may not conceal faces, permits a deeper examination of the elusive, arbitrary nature of community, as its members arrive at different times and with differing agendas and professions.

On Kieślowski's meticulous editing and reworking of the screenplay with Krzysztof Piesiewicz:

Each ramification of a superficially readable reality requires its rethinking, the momen-tary suspension of action denoted by the ellipses peppering the scripts’ conversations. That rethinking is the reediting Kieślowski constantly pursued, never relinquishing the documentarian’s passion for rearranging footage….As the ellipses preserve the inchoateness of everyday speech, they also turn the everyday around to reveal its metaphysical face.

From clever links of theme and metaphor -- mirror, shadow, milk, water, lies -- to characters that appear and reappear, the vastness of what Kieślowski achieves here by unifying ethical motifs is beyond what I can explain more than I have so far. I pretend like I know what I'm talking about when I review "important" films, but this is one where I just have to blabber on and hope that my connections make sense.

But what I'll close with is something that only came to me on the last night of viewing. After all these reviews where I write what Commandment is loosely a part of each segment, and thinking about that biblical connection in micro and macro ways, I've come to realize that this is an incredibly secular film, even if its commentary goes into religious and theological areas. Despite my antipathy to all things religion, I can value art which approaches this worldview in humanist and thought-provoking ways.

I came to view The Dekalog as passionately dispassionate, intimately universal, transcendently grounded. It's a work which has not since been equalled.