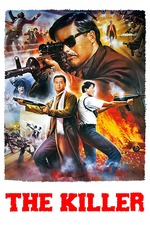 "Don't you remember? I always save the last bullet, either to kill someone else or myself."

John Woo's action thriller romp, the first film that I'm watching from my Secret Santa stash courtesy of my friend Mr_Macaroon. Give him some likes and follows! He's new here but a bigger film buff than me probably. Thanks again buddy. :)

I have virtually NO experience with movies like this at all, so I needed to do a little research to know the place this has in the film community. Yep, it's pretty up there! The Killer has been named a major influence for Tarantino and Rodriguez, and upon watching it's easy to see why. (I might also argue the characters and motif may have influenced Abel Ferrera's Bad Lieutenant, but I don't know enough about filmcraft to state that as a fact.) Furthermore, it's interesting to see what influences Woo was using in his filmmaking; many have noted Scorsese's Mean Streets and you can't help but notice it with the religious iconography and symbolism.

And yes, famously, this is the first picture where Woo's legendary white doves are used.

The Killer is an insane thrill-ride through the ganglands of Hong Kong, with over-the-top violence and stylized cuts. The editing is out of this world. A thousand movies since this have copied this style, some in homage and some in parody (for one that does both, I suggest the impeccable Edgar Wright film Hot Fuzz).

The story itself is far better than I anticipated, with that unusual success of "show, don't tell" scene-building. It's way easier said than done, literally, and Woo gives you so much for your eyes to feast on without giving too much exposition to get in the way. Just strap in and enjoy. Not every character matters, but what Ah Jong and Li Ying experience is right there in their performances and the absurd set pieces that get better and better as the film progresses.

Some can overlook other performers' bad acting, but I can't. For some, that's part of the fun in films like this, but to me it's just silly. And yeah, there are some bad actors here, and painfully stupid death scenes. Also, like, that one guy got shot right in the head, but he needed to be shot two more times as he was falling? Hm, funny, but not intentionally so.

Even then, this is a blast, and gave me a little more respect for a genre of film I don't normally watch, and Hong Kong cinema of which I have almost zero knowledge. So kudos friendo, thanks for sending me this Blu-Ray, and I look forward to the next one I got for Christmas!