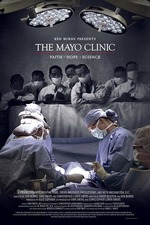 "This is where you would go when that case couldn't be helped elsewhere."

The moment legendary narrator Peter Coyote comes in to tell the first story of Dr. Mayo, it feels like old times from Ken Burns, as that voice is so seared into my mind from the all-time documentary series The Civil War. And you know just what type of film you're going to get.

Ken Burns' new film -- The Mayo Clinic: Faith, Hope, and Science -- is an uplifting if standard documentary about the revered medical facility in Rochester, Minnesota. Growing from a handful of providers to now 64,000 employees in its organization, the world renowned Mayo Clinic is a beacon of hope for many, a bastion of research for some, and -- as Burns always tends to emphasize -- a "uniquely American" medical facility.

At first a tale of Dr. W.W. Mayo and his family, this new film tells of the establishment of the clinic that came about in 1864 (oh man Ken even brings back "The Battle Cry of Freedom" in the soundtrack for a minute) but reorganized in the 1880s with the help of The Sisters of St. Francis and his two sons who took ownership. Soon the facility became known for complicated care of cancers and other serious morbidities.

There are excellent photos and old video clips of the innovations and scientific advances that the Mayo Clinic pioneered after the turn of the century, and also the culture of collaboration and a team-based approach that has come to define the medical center today. Also we learn intimate stories of how the Sisters were as skilled as many of the doctors in assisting in dangerous and difficult procedures.

The film flashes back from black-and-white photos to modern stories of patients (children, mothers, complicated diagnoses, etc.) that have been helped or saved by the Mayo Clinic. It keeps the film fresh and focused, and reinforces how the past was prologue; that is, how the standard of excellence has continued to this day.

The documentary, at times, borders on a huge infomercial. Those moments are sometimes brief, but they're there. Also, Burns recently worked on a medical series -- Cancer: The Emperor of All Maladies -- and there are some obvious similarities to that.

But he rarely if ever misfires, and this is a feel-good story of an extraordinary nonprofit medical facility and how two country doctors came to create a world class treatment center.

Added to Ken Burns ranked.
Added to I Call Dibs! (Films I’ve Logged Before All My Friends)