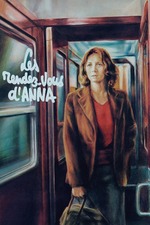 🐱Andrew Has Company for the Weekend!🐱’s review published on Letterboxd:

Chantal Akerman is easily my favorite female director ever, probably one of my favorite all-time, man or woman. I know this after watching just two films: this afternoon's Les Rendez-vous d'Anna and the unimpeachable singular masterpiece of Jeanne Dielman, 23, Quai du Commerce 1080 Bruxelles. I'll watch a third tonight, to make it official.

Les Rendez-vous d'Anna ["The Meetings of Anna"] follows the titular woman Anna Silver (Aurore Clément), a film director who travels over Europe to promote and screen her works. From Belgium to France and West Germany, Anne lives a contradictory solitary and social life; after all, she can't help but meet and interact with many people over the cities through which she travels. However, clearly she prefers to be her own company… or does she? These liaisons are sometimes to pass the time, sometimes of necessity, sometimes sexual. Her sexuality in particular is nebulously defined at best. During these interactions, for some cosmic reason, people feel compelled to open up to Anna about personal and intimate details. She never asks for them, and in fact appears disinterested. Perhaps the one person with whom Anna is reciprocally open is her mother (played by Lea Massari). In Akerman's deliberate pensive style, we witness a scaled-back radicalism that made Jeanne Dielman such a sensation, and gaze at each city with a disconnection like Anna. Notice how the sights and sounds all blend together. Other than the language, do any of these places look distinct? I wonder how Akerman was able to film with -- as Michael Koresky wrote for Criterion -- an "aesthetic spareness and impeccable structural integrity" in a style that still feels all her own.

This is a story of not just feeling lonely, but feeling displaced. Sure, Anna is on a voyage, some literal journey obviously from one urban center to another. But there's a philosophical one as well, though that direction really isn't clear at all. What is clear is that Akerman wants viewers to feel this lack of attachment too, and not too judge it but simply to experience it. With the long and often static shots for which she is known, this is another example of Akerman's distrust of plot, and gravitation to the "boredom of structuralism" that makes you perceive time in realistic ways. Watch Anna on a one-night stand, talking with an old friend, or finally giving some glimpse of personality in conversing with her mother. It helps that Aurore Clément is a tremendous actor.

I urge you to try what Anna does about a half dozen times in the film, in real life: while someone talks to you, no matter the topic (but preferably one about which he or she is passionate), as they continue, do not interrupt them and do not even make brief comments during long pauses. They will usually continue. Let them continue. Maybe there's another feminist director filming you from across the way the whole time in one steady take.

Added to Chantal Akerman ranked.
Added to My Subjective List of the Best Narrative Films.