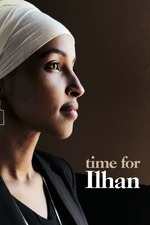 "She could be a candidate that could radically change the demographics of people engaged in public life."

We need more feel-good but meaningful documentaries like this.

The Election of 2016 was a rough one, but that doesn't mean that everything about it was bad. Look beyond the headlines to find good stories. Case in point: Ilhan Omar, the first Somali Muslim woman elected to state office in America.

Time for Ilhan, premiering at Tribeca but airing on Fuse now, follows an immigrant in Minnesota running for the state House of Representatives, District 60B in Minneapolis. She faces the typical challenges in a way, but also significant others with her background and lack of experience. She also faces a 44-year incumbent, a woman who is revered for her longtime service but also accused of complacency.

But what Ilhan lacks in experience, she makes up for in ideas, motivation, and positivity. Quite simply, she's a breath of fresh air. Young, eloquent, endlessly optimistic, I'd be proud to be represented by her.

For a nice little update, she is currently running for the U.S. House of Representatives in 2018, and will almost certainly win a seat this Fall in a heavily Democratic district. Check out some great articles about her in The Intercept, The New Yorker, and Time Magazine.

Unfortunately the doc suffers from prominently featuring Keith Ellison, currently facing assault allegations and running for Attorney General in Minnesota. The filmmakers didn't know that at the time, but still...

[Formerly part of Good-to-Great Documentaries That Fewer Than 100 People Have Seen.]
Added to I Call Dibs! (Films I’ve Logged Before All My Friends)