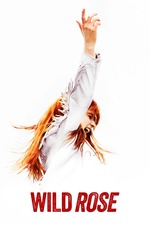 Jessie Buckley is having a pretty sweet last couple of years, from her roles in the BAFTA-nominated Beast and the HBO critical smash series Chernobyl, and now starring in the musical indie hit Wild Rose. (This is where I will link, for the second time today, another excellent piece by Jack Moulton for Letterboxd about the actress.) I took the drive today to see this lovely film, a bit of a different story than I usually go for, one of a Scottish singer trying to make it big to the Nashville country music circuit.

Buckley stars as Rose-Lynn Harlan, aspiring country singer in Glasgow. There's not much of a music scene there, save for one bar with loyal country fans; though, the BBC features the genre prominently on a radio station. Fortunately, Rose is just getting out of a year-long stint in prison and ready to start over, coming back home to her two young children who've been watched by her mom (Julie Walters). The foul-mouthed fuck-up Rose has a son who barely knows her and a daughter clearly traumatized and saddened, as well as her own mother who doesn't believe in her dream of going to Nashville for a music career. Rose scores a new job as a domestic worker for Susannah (Sophie Okonedo), wife and mother of a wealthy family who notices her talent and is all in on supporting her. When her connections get Rose a meeting with BBC Radio star Bob Harris (playing himself in one of a few cameos in the film), he believes in her too. But with two kids she doesn't know how to raise, and no money or safety net to speak of, this newfound hope may still not be enough to make her dream come true.

While this movie didn't hit me like the criminally underrated Blaze from last year, Buckley as an outlaw country star is yet another surprising turn in her young and fantastic career. She's had plenty of experience singing, doing that for years, but she's just a natural here as soon as she puts on her cowboy boots over her probationary ankle monitor. (She's lucky, mine didn't fit nearly that well back in the day.)

Wild Rose takes a few twists I didn't see, and has a deeper story than other "dream of stardom" kind of movies. It's about redemption, motherhood, and bucking the trends. Buckley is sensational and totally owns every song she sings, though the rest of the cast (save for the two young child actors who are quite talented) is merely fine. Thick Scottish accents are hard to understand, but I picked up about 90% of the words. A side plot involving Susannah's husband and his disdain of Rose was a little off-putting and jarring, and I'm not sure I quite liked the last 15 minutes of the film which took me by surprise a little. Kudos for not sticking to the formulaic ending I anticipated though.

Enjoyable as heck though, and a toe-tapping good time in a theatre that had two people in it. Sometimes I'm baffled by who goes to what movie nowadays. Every country-fried beer-drinking 55-year-old white woman with whom I work (there's about 15 of them) each weekday at the doctor's office would love this film. What the hell, ladies?

Added to The Best Narrative Films of 2019.