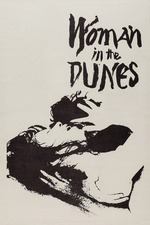 Woman in the Dunes

☆"But you see, if it weren't for the sand, no one would bother about me. Isn't that right?"☆

So I'm going to Myrtle Beach in a couple weeks to stay at my parents' place, and to spend time with my brother and sister-in-law and most importantly my one-year-old nephew. I love the beach and I can't wait to play in the sand with him. But if I see any young Japanese widows around, so help me...

Woman in the Dunes [砂の女 Suna no Onna, or literally "Sand woman"] begins by following a lone entomologist and schoolteacher Niki Jumpei (Eiji Okada) who is observing and collecting insects in sand dunes, not far from a poor Japanese village. While relaxing on the sand, he does and misses the last bus for the day, so a few townspeople welcome him to stay. Down in a sand quarry they guide him to a young widow's house who is never named (Kyōko Kishida). After kindly being served dinner and having a bed made up, the woman steps outside and stars shoveling sand into boxes to be lifted up out of the quarry for concrete; she says that he'll help on the next night, despite his insistence that he needs to leave quite soon. When he wakes up that next morning without disturbing her -- she sleeps naked, uncovered, yet with sand all about her body -- he finds that the ladder to the quarry and her tiny home is gone; he's literally trapped in this pit, held captive by the woman and the other villagers who control the only means of escape. When he tries to turn the tables and incapacitates the woman, Jumpei realizes the sinister methods that now keep him confined in a prison of sand, and soon he finds himself under psychological and sexual torture, with little hope for freedom.

Once again working with Kōbō Abe, adapting his own novel for the screen, Teshigahara delivers an allegorical masterpiece of Japanese New Wave cinema. Far more than just a story of a psychotic village capturing men to keep their way of life afloat, Woman in the Dunes hits deep nerves about purpose and one's place. As opposed to the next film of his, The Face of Another which I watched this afternoon already, this picture deals with identity in a wholly different way; not with transforming it, but accepting it despite being wracked with pain and ennui.

This is existential dread, with sand getting in all the wrong places. Trust me, I was young and in love many moons ago: don't do it in the sand, people. Sand goes where you don't want it to go.

I was curious about the motivations for a film like this, so singular and so unique, and years ahead of its time. In an interview with Max Tessier in his book Le Cinéma Japonais au Présent: 1959-1984, Teshigahara was asked about the use of "the human body with elements of nature," and said the following:

The sand represents for me the society in which we live. Usually, sand and dunes are a placid, romantic landscape, which may appear to us as somewhat fantastic. But in my film, I tried to highlight the other aspect of sand, that which blocks, which interferes with human activity, because this material also has a harmful side….If [the woman] leaves this hole, the sane will take hold, and the entire village will perish. She feels obligated to protect her village.

More than just purpose, the movie examines free will in ways I'm not sure I've ever seen on film before. And it happens gradually, so subtly over the course of nearly two-and-a-half hours -- it doesn't feel nearly that long, trust me, the story is captivating (no pun intended) -- that you can't help but place yourself in the situation to think of how you would confront it. Time and time again in reviews and analyses, the comparison of Jumpei's fate is made to the mythical Sisyphus. The struggle is real, as the kids say.

The metaphors cut deep, from economic divisions and social stratification, to the pitting of urban and rural citizens against one another and political control by elite "puppet masters." Also, as someone who's spent nearly two years in jail, the theme of institutionalization is clear here, and to what norms one can become accustomed. It's interesting to consider, that this man regularly speaks of his old life but only in small bits with no details. If he really enjoyed that life, wouldn't he ruminate on it more? What of his students, his classroom, his passion for teaching? It's never mentioned. What a wonder -- or horror -- it is what you might push aside when you believe you'll never have it again. Audie Bock stated it well years ago in a Criterion essay, that the Japanese culture itself and the 1960s in particular would find the story of Woman in the Dunes hitting a powerful nerve:

For a nation of islands that was unified only by a police state that required a passport to travel from one region to another for nearly three hundred years, where marriages are consummated after thorough detective-agency investigation of family, health, education, and professional records, where even now an individual’s new address is verified within days by a visit from the policeman from the corner kiosk, the impulse to drop out remains extremely powerful. If today’s dropouts simply remain at home, doing nothing but surfing the Internet and eating food shoved under the door, they are still rejecting the perennial demands of ordinary Japanese life for an identity of belonging.

With the haunting minimalist score of Toru Takemitsu, the brilliant cinematography of Hiroshi Segawa, and the one of a kind collaborative pair of Teshigahara and Abe, Woman in the Dunes is landmark game-changing cinema. Absorbing and all-consuming like the sand which is ever-present in the characters' existence, I found myself riveted by the film. That the Academy Awards saw it this way too, granting nominations for Best Foreign Feature and Best Director, only validates the mastery of this artform which its creator possessed.

Added to Hiroshi Teshigahara ranked.
Added to My Best Reviews of 2019.
Added to My Subjective List of the Best Narrative Films.