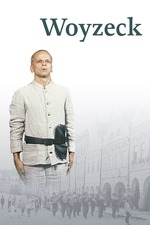 ☆"Nothing but peas, remember! Next week, we'll start with mutton."☆

Despite being completely different movies, you can't help but compare Werner Herzog's Woyzeck and Nosferatu the Vampyre.

Both were released in 1979. Both were filmed in a short time with the same (surely exhausted) crew. Both featured "best fiend" Klaus Kinski as the lead. Both were adaptations of European works. That's really where any similarities end.

Kinski stars as Franz Woyzeck, a low-level German soldier living in "a small town" during the 1800s, doing odd jobs for and following fruitless commands by the Captain (Wolfgang Reichmann) to support his family. His "other" family though is a young illegitimate son fathered with his beautiful mistress Marie (Eva Mattes), and to help take care of them financially Woyzeck also volunteers to undergo experimental treatments by the Doctor (Willy Semmelrogge). Perhaps due to these experiments -- one of which involves a diet of only peas -- Woyzeck begins to slowly go insane, which is of particular interest for a man who was already quite odd and on the edge of sanity beforehand in this quiet idyllic village. When he suspects that Marie is sleeping with a handsome drum major (Josef Bierbichler), a jealous suspicion that is in fact true, he's severely humiliated when that drum major beats the heck out of him. An impending nervous breakdown, though, may be dangerous to others.

Woyzeck is probably another one of those Herzog films that defy plot summary or black-and-white explanation. It just doesn't work to do that here. Based on the famous "unfinished" stage play by Georg Büchner of the same name, Herzog adapts it and chooses the ending he sees fit, as is the tradition from countless German artists. The "working-class tragedy," though, is essentially unheard of outside that country, despite the interesting story about it: Woyzeck was not only unfinished at the playwright's death, it was so fragmented that no one even knew the order of events that could be deciphered, or if he was nearly finished with it or halfway or barely at all. So each interpretation of the work takes on a life of its own.

Herzog chooses to show the titular soldier already clearly in the depths of losing his mind, pushed from all sides slowly spiraling out of control. "Slowly" is a key word, as though the film is only around 80 minutes it moves at a snail's pace, with long scenes that allegedly were mostly done in one take, some of which do not appear to lead to much. (Woyzeck was filmed in only two-and-a-half weeks.) However, there is something of an uneasy dread as the story moves along, when it's clear that Woyzeck is an anti-hero of sorts with whom we empathize -- he is humiliated by nearly every single other character we meet, often truly emasculated -- but will face a crossroads where we can no longer excuse his behavior. When an ordinary man who may have a mental illness is pushed to the brink by the authorities he obeys and family he once trusted, and no institutions or professionals can help him and in fact only exacerbate those pains…

Oh, no… it's starting to sound like Joker now, isn't it? Goddamnit.

Well, now that I've gone there, I might as well praise the lead too, as Kinski is outstanding in a demanding role, unnerving and full of involuntary gesticulations amidst a drone-like existence, ultimately capped by an even more unnerving finale. It's worth waiting for, but the 65 to 70 minutes before that will perhaps be exhausting for many viewers.

A divisive film but a compelling one. It seems like a movie full of great ideas that don't coalesce too well; nonetheless, there's so much to appreciate about a portrayal like this in-between the uneven themes and atonal purposefully bizarre pacing for that first hour. A genuinely haunting and frankly a little disturbing finale rescues Woyzeck from being a forgettable bore to a messy class drama with an unforgettable conclusion.