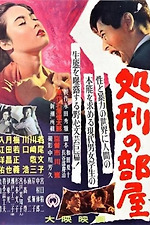 Hiroshi Kawaguchi is great as probably one of the most disgusting little punks ever portrayed on silver screen yet even though he has zero redeeming qualities, it's interesting to follow his nihilistic journey in capitalized Japanese society ruled by ideology conflicts between the younger and older generation as well as between those of the younger generation who are willing to adapt to still existing traditional norms and those who are violently rebelling without having an idea what the new norms could be.

Kawaguchi's Katsumi doesn't only frustrate the viewer who are unable to sympathize with him but also the people around him. His rebellious attitude that explodes in meaningless acts of pure nastiness destroys the people that get into its way. Akiko, played by the always amazing Ayako Wakao, is the victim who suffers the most as Katsumi rapes her in a scene that is truly painful to witness. Even though she masochistically confesses her love to him, he couldn't care less and this erratic attitude ends up in Akiko's self-destructive act as she cannot find any reason at all why Katsumi would do such a thing. We don't find real reasons for Katsumi's behavior other than rebellion for rebel's sake and it's exactly that what makes this film at the same time brilliant and frustrating. Because Ichikawa knows how to contextualize it all, how to describe the indescribable. Katsumi is the extreme embodiment of the (and at the same time any) lost generation in a society that is going through a very difficult adolescence. In today's western world, plagued by far-right terrorism and school shootings & other "indescribable" acts, this is chillingly accurate portrait in its scope.