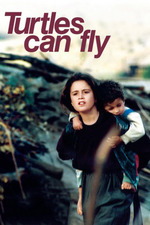 While I'm laying on my bed, watching Bahman Ghobadi's Turles Can Fly and crying like it would help anything, Iraqi forces together with the help of USA and Kurdish Peshmerga forces are trying to conquer Mosul from Daesh. There's approximately 1,5 million civilians trapped inside the city and UN fears that Daesh might use them as human shields - nevertheless, it is impossible to leave or to stay. When we jump to Syria, we can hear the rumbling from the sky as Putin's air forces are dropping bombs over Aleppo, helping dictator Bashar Al-Assad who has used chemical weapons against his own people. At the same time Turkey is backing up JIhadist groups who USA supports too and at least supported with its western allies. Not to mention what Erdogan is ready to do to kick Kurdish forces of YPG and YPJ who are fighting for democracy in Syria together with SDF coalition that doesn't only consist of Kurds. Jump to Yemen, coalition featuring USA and Saudi-Arabia are bombing rebels while at the same time slaughtering thousands of civilians. Let's fly again, where should we go next? Chechnya or Palestine? Putin gives Chechnya to criminals as long as they keep order - every word against will be punished with methods more horrible than dying. In Palestine, it is another day. Zionist forces, backed with money, once again 38 billion money from homeless Vets, other poor folk of the USA, are making Arms industry happy when they test their weapons against people whose homes they have invaded and destroyed. What if we go to Africa? Wait, how many of us knows what is going on in Africa? I don't know except that Boko Haram returned some dozen girls to their parents while still "owning" 196 kidnapped girls with them. Somalia, well, I can hear bombs, I can hear Al-Shahab. But that is all I know... Why am I alive?

This film is terrifying to watch - perhaps because I'm a westerner who knows how well we have fucked up, because I know what kind of people sit in our governments while we have either everything, all comforts, or our own problems that take all the time. Coca-cola and television, not to mention internet, are some of the greatest inventions in creating the illusory feeling that we are somehow moral creatures. I can watch all the news and cry over them, judge them quietly here on internet with couple people reading or tell to my close friends and then forget them and return to my shame. Self-pitying isn't helping, it has never helped and it will not. But it gives a white man some comfort to live with himself.

But cinema - it is never supposed to make you feel good about yourself or at least, not all the time, not without any edge. If it does, it is propaganda. That is THE truth but still I'm enjoying lies every now and then. Because it gives easy answers. But cinema isn't supposed to make you cry and pity yourself, it is there to heal you and give you strength. When I see what Bahman Ghobadi has done, how close he has gone and how he has taken advantage of his pain, I feel the same fire burning in me and I won't let it burn out. It isn't still too late to do something. I'm in my twenties, becoming real angry man and by taking advantage of my position, by learning how to channel this anger, I can do something and I know it. I'm not superman but I have a voice, like all of us, and we should use it. That is what cinema is to me, that is what it should be. To others it is some other way but to me it is this.

Yes, this is a film you cannot miss.