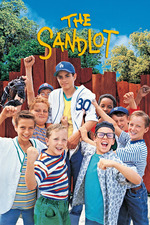 A charming, silly little slice of Americana, centered around a group of boys and baseball. The narrator angle was ripped straight from Stand By Me and the goofy ball recovery scenes in the final third felt heavily influenced by Jaws. The Sandlot is obviously much more vanilla, but it is those extra cinematic touches that lift it above the typical family-fare.

Narrator: "Michael Squints Palledorous walked a little taller that day. And we had to tip our hats to him. He was lucky she hadn't beat the *crap* out of him. We wouldn't have blamed her. What he'd done was sneaky, rotten, and low... and cool. Not another one among us would have ever in a million years even for a million dollars have the guts to put the move on the lifeguard. He did. He had kissed a woman. And he had kissed her long and good. We got banned from the pool forever that day. But every time we walked by after that, the lifeguard looked down from her tower, right over at Squints, and smiled."