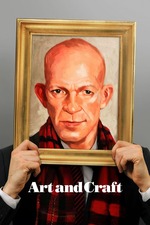 Pasted from the message board:

This is a wild ride. Essentially, this is the story of a lonely forger compelled to feel wanted, backed by an industry looking for the easiest win. Mark Landis became one of the most prolific forgers in the history of art. And gave them all away. He even brought a film crew where Landis portrays a priest and donates a "fresh" Renaissance painting. He even blesses the mark, for good measure.

Throughout the documentary, you're being told that Mark Landis is this genius forger. I'd even go so far to say you're lead to believe he's this mastermind. You learn it's more than that. His personality is his creation. A creation to help him cope. The documentary turns the head on what a true crime can be. Landis made it easier being the true faux-lanthropist he got addicted to being. They mention him being in his own category of forging. In turn, this is it's own type of true crime doc. It's a fascinating watch.