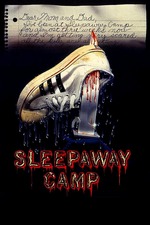 As a transwoman, I feel expected to be offended by this film by its reputation in the community. Fortunately, I am not bound by my sisters' tendency of rote dismissal towards bigoted art or especially imperfectly phrased art, as this merely is.

It's rather surprising to me this isn't more widely celebrated in trans circles. Of all the slashers I've seen, This is the only one I think I have actually rooted for death in. The film is so removed from any semblance of emotional reality that death doesn't mean the same thing as it would in a film with even a modicum of realism. The baddies are so cartoonishly irredeemable, picking on Angela just because she's an easy target. They even defeminate her. She is one of the most likable slasher "villains" (especially for trans women), in league with Freddy Krueger.

There's obviously an argument to be made about the pathologization of gender dysphoria here, but that is incorrectly placing the film in a context where it shares the same pathology as we do in reality. This is a movie where a camp supervisor nearly beats a kid to death for the mere suspicion, not of murder for its evil, but of ruining the camp's business with all the murders. This is a goof, more frank than it is horrific (until the last scene), with elaborate murder setpieces and dialogue quotable due its weird blend of turgidity and blunt honesty.

These moments feel made to stick out and feed the film's absurd tone, generated primarily by people framed in the middle of a shot, commanding it with a stare or taking the focus as a full body pillar on the landscape, and by a bizarre, shouty performance style. There are touching of queer camp dotting the film as well; the profoundly flamboyant mother, the softness of the lighting on the cuddling gay men, the abundance of short pants, and obviously Angela's melancholy with retroactive or prior knowledge of the twist. I found it very charming.

Angela's forced fem origin is a fetish many trans women have prior to transition and, sometimes, the affinity carries over. To have a character forced fem after a trauma in a serious, long term capacity turn into a murderer doesn't imply trans people are murderous, it's a legitimately fucked up thing to happen to a person, more so than simply being routinely assigned the incorrect gender at birth. It doesn't really need to make more psychological sense than "fucked up," and indeed the film doesn't probe a very series inquiry past that, and indeed it shouldn't. This is a film of quotables and shock value. The final twist, in a grindhouse context, is a shock conceit. It will never be a default expectation a woman has a penis. It can become a banality, but simply because the film does not express that ideal does not make it an insidious work. The invocation of the "trap trope" here is honestly employed very neutrally, meaning Angela isn't evil for hiding her body. It's a meaningless surprise; it changes almost nothing except our conception of Angela's already nonsensical psychology. She's sympathetic the entire film. I don't see how explaining that as victimhood and "queerness" changes that. At any rate, I thought she was awesome.

Lady in the Water