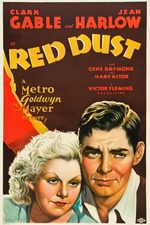 Apparently the casting for Red Dust began as Greta Garbo and Adolphe Menjou (?), then it was Garbo and John Gilbert (!), then Garbo and Clark Gable (?!), and finally they settled on Gable and Jean Harlow. It's a good thing they got that figured out, because the cast is what makes this film work.

When you strip Red Dust to its bare bones, you're left with a story that is just okay. The drama piled on top of that story, though, is worth sticking around for. The heat-oppressed location and the chemistry between all three leads are both compelling. I really wish Jean Harlow and Mary Astor had more scenes together. Their wariness of each other turns out to be a point of commonality between them, and the film could've explored that instead of boiling down their relationship to a same-but-opposite fixation on Clark Gable in his little pith helmet. (In the love triangle setup, Astor tends to be overlooked, but in addition to being a solid "rival" for Harlow, I think she's equally good as the wife whose passions are unsettled by Gable and his world).

Much as I would've loved another pre-Code Garbo-Gilbert collaboration, I agree this was the wrong vehicle for them. I can't see them being banter-y and getting drunk together--Gable and Harlow are able to play antagonistic equals without compromising the romantic spark between them. The bulk of their relationship's believability comes from Harlow, too. She paves her way with sass and some childishness, but she's really the only adult in the film. She has the disillusioned high ground when it comes to seeing her life as it is, and that gives her character an intriguing layer of maturity hidden beneath the wisecracks.

This isn't the first time I've seen Gable and Harlow together, but it's the first pre-Code of theirs I've seen and boy, does that make a difference. Surprisingly, Wife vs. Secretary (1936) does not feature a scene where two people snap at each other, then turn right around and wake up Mary Astor by wrestling to the floor and getting it on in the middle of a thunderstorm.