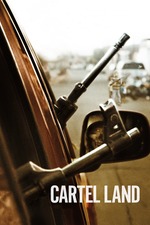 Matthew Heineman’s documentary on War on Drugs and the individuals working to solve the problem is quite vivid and a truly eye-opening exposé. Cartel Land exposes the dangers and ugly truths of this interminable cancer of our society. It doesn’t lay the answers or solutions, but it perfectly examines the idea of ‘how it is’ kind of mindset.

Heineman tries to have a two-sided kind of narrative telling two stories of men in two different sides of the battle: one who is an American vigilante in Arizona and another is a leader of paramilitary in Michoacán, Mexico. The latter’s narrative overshadows the former’s story which brings an unbalanced setup, but still centers on one subject. I wished it centers solely on the leader of the Mexican paramilitary Jose Mireles, because frankly the other guy’s story is somehow unnecessary.

Overall, Cartel Land delivers what it supposed to address. And it is how treacherous our world is and no one can stop this cancer not even our respective governments and police forces. Somehow they are all connected, working together and this devastates me so much. So many lives have been wasted and we people deserved more than this.