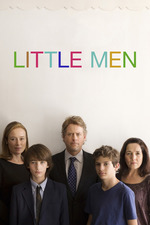 Director Ira Sachs proved to be a keen, sensitive storyteller of the middle class New Yorkers. His singular if not, intimate introspective of these struggling middle class is profoundly perceptive and grounded. However, seeing my third Sachs film—following his sensitive LGBT dramas Keep the Lights On, and Love Is Strange—there is something minor and missing amidst the simplistic nature of his films. Little Men gravitates in its own constructed world and stays there. It never reaches out to the world at some extent. The film is really owned by the relationship of these two strong-willed boys and how they navigate life’s disparity as both of their parents clash on property.

There is the undeniable power of sensitivity in this that Sachs has proven in his other films, however all of his films feels as if they are hiding inside a shell and not really offering up something vital and unique to the ‘rest of the world’. I don’t know If I want something big from him, but I surely know that Sachs does not offer any stories that is different from his chosen point of view. The acting is great. Particularly Michael Barbieri who plays the fearless kid as well as Paulina Garcia who is controlled in every inch of her emotion. At the end, his singularly intimate perspective in Little Men is proven to be admirable but it rather feels short of things. I was expecting a little bit more.