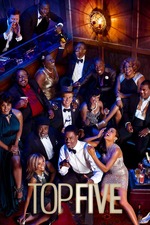 Where the hell did this thing come from?

Seriously. I first caught the trailer not even a month ago, and only saw it today on a whim before I had to head to work. No one I know has heard of it except for the passing "Oh a Chris Rock movie" glance.

This really is one of the best films I've seen this year. While it's a story about fame and how you have to try to accept it, it's also about the idea of just embracing what you are and not fighting to death to be what you're not.

Moments where Rock and Rosario Dawson are having an conversation and a fan will jump in for an autograph, and the camera just keeps moving along with them. Never really concentrating on the fan, but on how it's really seen in Rock's eyes. It stays subtle with this point, even with random fans yelling his name as he passes by. Know what else I wasn't expecting when I went in? High quality sound editing. I know right?

It really has a good balance of comedy, and making sure all these characters are kept well rounded, which means as soon as the film gets dark, you aren't just waiting for the funny, you quickly realize you want him to not have a drink. You care about his disconnect from his life.

You care that Dawson seems to have trouble just making anything in her life work. Multiple writing personas, and multiple partners of all races and sexes. She's easily the best part of the story.

Even the seemingly smaller characters: His wife is a Real Housewives wannabe with a show on Bravo, but when she's confronted with her reality she actually shows herself to be more human that before. Even the best friend body guard really comes across as genuine.

This is what makes the gross out humor work that much better. It never relies on it, and so when it does pop up, you laugh, instead of just hoping it moves on quickly.

The cameos also work. Adam Sandler is funny, which I knew he still had in there somewhere. Then Jerry Seinfeld makes it rain at a strip club. Yes, this film has everything.

This really is a well done comedy, and a surprise. If we can expect more like this from Chris Rock, or hell Hollywood in general, then I'm all in.

It Happened One Night