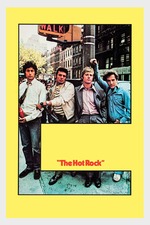 A little bit too unfocused for a heist film! The situations beg for broader comedy but the performances are asking to be taken seriously. There are amusing lines here and there no doubt but it really isn't funny enough and that makes the story slide into unwitting silliness at times.

Also, all of these guys except for Redford are such bumblers that it isn't very fun to watch them execute these heists. The last twenty minutes are fantastic but after watching these guys fuck up everything else in the movie we're expected to believe they pull off this simple heist with no hitches at all? There's no consistent logic. Also certain plot points are dropped after we are led to believe that they will add some conflict, and we should have been allowed to see Zero Mostel's absolute comeuppance after his sneering turn towards the end there. I will say the Quincy Jones score is great and that 70s photography can't be beat.

While it is stylish, it just feels half baked to me. Redford is good but he seems bored and Segal overacts, as usual, and I don't like to speak ill of the dead and especially not the recently deceased but George Segal overacts and that's that, God rest his soul.

A liked these reviews

A is using Letterboxd to share film reviews and lists with friends. Join here.