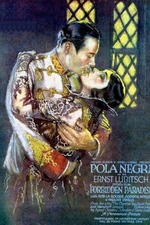 I probably resisted this for as long as I did simply because it specified that it was about Catherine the Great, whose reign as czarina overlapped the American and French Revolutions. Then I might’ve overlooked the automobile, the smoking, the belly dancers, the hair bobs, the pseudo-Bolsheviks, the “American bank” and the Romanticist attitude toward sexual dalliance. Set it in Flaussenberg or in a later era — THE STUDENT PRINCESS OF OLD ST. PETERSBURG — and I’d think about comparing it to Lubitsch’s best.

This is still a wonderful dirty joke of a movie from the auteur of THE DOLL and the aforementioned PRINCE movie. Adolphe Menjou’s grin is at its shit-eating best, both at matters of state and the bed. Lubitsch’s closed doors and leave-takings are ubiquitous, and the title cards revel in puns. Pola Negri and Rod LaRocque are both a little too modern for the era but ideal for this story, with Negri filling the screen with plain-but-discreet sex. And Lubitsch was a visual jokester too (the Stars at the banquet) ... until he wasn’t, as the two coaches as the queen’s maid looks down on the courtyard. The male gaze is presupposed throughout, but as the subject matter as Catherine conducts ... diplomacy. But everything ends happily as the French ambassador and Menjou look at each other.