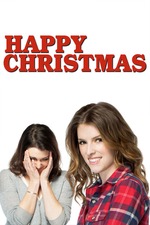 I don’t know what W.C. Fields would have thought of Joe Swanberg’s Happy Christmas, but it certainly illustrates the misanthropic comedian’s adage that you never share the screen with kids or animals. Three-year-old Jude Swanberg, the auteur’s real-life son, steals the show as his dad’s onscreen son; he’s the ideal age for kids to be cute and play-act without being able to have Cute Kid Actor Syndrome. And it’s actually an important role, not just the cinematic equivalent of showing pictures of your kid. Happy Christmas is about maturation, specifically what it looks like in a Generation-Y hipster idiom—how family members change and don’t, grow up and don’t, reconcile and don’t—plus the changes and compromises that children force on (mostly) women. So getting the right child performance as the family’s center is crucial. This is also an artistic maturation for Swanberg, whose direction is sure-footed with none of the blocking and acting awkwardness—or ugly video look—that marred his own early baby steps in the medium; I also have to admit to stifling giggles when he cuddles up to on-screen wife Melanie Lynskey and the screen fades to black. But the acting and casting are all ideal—Swanberg and Lynskey as a Chicago married couple, Anna Kendrick as his irresponsible sister who’s trying not to be, Lena Dunham as herbest friend and wisecrack confidante, and Mark Webber as Kendrick’s potential new beau/dealer. You can still see the improv-method’s “seams,” but at least here it’s interesting talk, the basement-bar three-hander on motherhood between Lynskey, Kendrick and Dunham being particularly fine. And rather than let the cameras run, there are jump cuts in these lengthy conversations, which produces the same sense of time—one of those all-day conversations—without the interminable wheel-spinning.
-----------------
First published at SLC Weekly: www.cityweekly.net/utah/blog-19-10341-sundance-2014-day-5-reviews.html