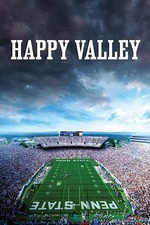 Amir Bar-Lev is a superb journalist whose documentary films—My Kid Could Paint That, The Tillman Story and now this one—I like less the more I think about them, and the more he tries to Commit Sociology. At least when he fails, he’s failing at a level most documentarians aren’t even aiming for. If you walk into Happy Valley thinking Jerry Sandusky is Ben’s ice-cream-making partner, this might seem like a great movie. While there are no revelations here, the known facts—about the scandal involving child sexual abuse by the former Penn State University assistant football coach—are laid out crisply and logically. All significant sides of the dispute over the abuse and what legendary coach Joe Paterno knew and did get a fair say, and unexpected moments of ordinary people’s behavior provide texture and a portrait of a community; my favorite scene was the protestor standing beside the Paterno statue with a sign, ruining tourists’ attempts to get a photo. But to what end, to anybody who already knows those basic facts? Every possible takeaway is either arrant nonsense or undermined by material elsewhere in the film. The student riots, the hissing at the prayer, etc. all seem to portray what the NCAA calls a failed culture that was too focused on “winning first” or “hero worship.” But the connection with Sandusky is a problem; was there really was more of those things in State College than in football programs in Norman, Austin, Tallahassee, South Bend or heck the entire Southeastern Conference? Then what to make of Matt Sandusky, who claimed his adoptive father abused him, but only did so at the end of the trial, about the least defensible time? And when Bar-Lev asks him whether Sandusky’s wife knew what was going on, he merely quotes her denial. From him, that’s not a good enough answer. And all in a film that seems to point fingers at the entire community for not wanting to see. Perhaps the entire point though is that all of this is nonsense—that Paterno, the school, the NCAA, the community, the alumni are all looking for scapegoats, unsatisfactorily. If that be the case (and it's not implausible), why make this film at all?
-----------------------------
First published at SLC Weekly: www.cityweekly.net/utah/blog-19-10341-sundance-2014-day-5-reviews.html