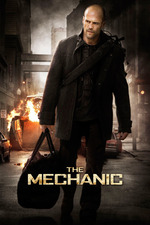 I am generally a fan of Statham's sense of exasperated professionalism, which is on display well here, but around it was a frustratingly dour movie without much to recommend. The plotting and character were perfunctory, the sex and gore were eye-rolling, and Ben Foster tended to drag the movie around him- his twitchy energy didn't really mesh with Statham, which in a better-organized movie could have made the point, but in this one just made me annoyed when he was on screen. The parts with just Statham towards the end are entertaining enough (there's a good fight on an airport shuttle), and it's pretty short, but really, I'd rather be watching a different movie.