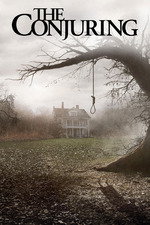 There were small moments here I thought were well done (Patrick Wilson spins the straw of bad writing into gold for his character, some interesting camera work), but they couldn't make up for the myriad things I disliked about it. Once again I think the hype added to my disappointment; when you expect something to be good and it's just average, it becomes sort of bad due to the crushed expectations. My biggest issues were as follows:

1) It's just not scary. Maybe if you've never seen a horror film and this somehow is your first, this would be scary. The clapping game is set up to make you think there's going to be something really upsetting to come of it (that conceptual buildup with no payoff is a pet peeve of mine) but instead you get a lady in witchy makeup jumping off a wardrobe. I laughed because it was so paint-by-numbers predictable and silly. In fact it often lapses into a kind of stagnant dullness when you expect something frightening and, well, nothing really happens. The lack of actual fright probably wouldn't bug me so much but that this movie has a reputation for being terrifying. It just fucking isn't. A sheet making a human shape? A chair levitating? Some dangling feet? Yawn.

2) God, the melodrama. Part of the issue here is how seriously they try to take Ed and Lorraine Warren, who are at best minor psychics and at worst manipulative hacks. Patrick Wilson and Vera Farmiga are about as good in these roles as I think is possible, because they're surprisingly boring considering their spooky profession. So much of the script is devoted to them sort of staring at each other and hugging and professing their love for their daughter. Likewise the Perron family constantly dissolves into melodramatic trappings in what is clearly an attempt to make us attached to them. Family does not just instantly equal affection for your audience. Sometimes we actually need some understanding of their personal characteristics, backgrounds, motivations. We don't get any of that here. We're just supposed to care about them because they happen to live in a house that is haunted.

3) Distractingly religious and patriarchal in tone. A lot of the problems I have with this type of narrative can be summed up in my lukewarm feelings towards The Exorcist, which I think is probably one of the more overrated of all popular horror media. This film professes that witches are evil, the nuclear family is good, and religion is essential to salvation. I disagree on all three counts, and its insistence of these annoyed me to no end. I'm not against narratives that examine spirituality and theology, but this isn't really examining it so much as toting Catholicism as absolute truth. Even if this exists just for the sake of the narrative alone, it's not something I'm personally interested in.

I just didn't care about this experience. I don't understand why people like this movie so much. It's almost a study on the effects of hype on the psyche. Also, goddamn is that Annabelle doll so fucking dumb. In real life the doll was a raggedy ann, but why the fuck would you ever keep this doll in your house unironically?