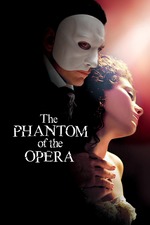 I hadn't revisited this in like 5 years but I own a copy of it and used to watch it ad nauseam in my middle school years (I also had a CD of the soundtrack that I'd listen to with alarming frequency, no idea what eventually happened to it). I own almost 1,000 physical copies of films but this went back up on Netflix and sometimes I'm really lazy and won't revisit something unless it takes no more effort than me literally pushing a couple buttons on the Roku remote. I'm thrilled this holds up as well as it does almost 15 years after it was made. I remembered it being Peak Gothic Melodrama Musical Mood Piece and boy howdy, is it. Which of course makes it a kind of masterpiece and a film that I fucking love.

That opener with the chandelier being lit and hoisted into the air as the Opera Populaire bursts into color a la The Wizard of Oz set to the unabashedly dramatic main theme played on an organ is the definition of gothic drama. I love Joel Schumacher's films unironically because he commits whole-heartedly to genre every single time, no matter what that genre may be, this certainly being no exception. Give him the task of making a gothic soap opera for the screen based on Andrew Lloyd Webber's enduring stage musical, he goddamn will do it with every dramatic bone in his body. Emmy Rossum is a complete angel, with a voice like a literal angel, a face like an angel, just being in her presence here is enough to fall in love with her and it's not hard to understand everyone's obsession with her in the slightest (she and Patrick Wilson look so fucking great in the masquerade scene, my bisexual alarm went off like fucking crazy this time around, it kinda sounds like the Kill Bill alarm). This is the only movie I really love Gerard Butler in (well, almost, I do love 300 because it is batshit insane) because he's not playing himself for once (like almost every film to come after this for him). He's playing a vaguely deformed psychotic idiot savant who's been abused who also happens to be extremely sexy (and who has perfect teeth despite growing up alone in a dungeon and OH MY GOD that Red Death outfit, what a fucking look). I was whole-heartedly Team Erik in my youth because I've always been obsessed with tortured gothic anti-heros (#1 Heathcliff fan here everybody, if I ever get money to open my occult and witch supply store, I'm calling it Heathcliff and I'm not fucking kidding) but as an adult revisiting this I was totally thrown by how fucking hot I found Patrick Wilson's Raoul to be, a character I professed to hate when I was a teen because he was "boring" when he's actually not only extremely beautiful and kind with a voice like an angel (SOMEHOW EVERYONE FORGOT PATRICK WILSON'S SINGING VOICE LET'S BRING THAT BACK OKAY) but also not psychotic, so by default is the better of Christine's two suitors!

Most of the Carlotta (Minnie Driver) scenes drag like hell in the present, especially the Primadonna sequence which feels way too stage-musically to fit into what Schumacher is doing here and should have been cut out. I mean, I kind of enjoy the way Driver is going totally off the chain with the diva thing, but the character is not interesting at best and is a bad caricature of "difficult" women at worst. The stuff with "gypsies" regarding Erik's tortured upbringing and subsequent escape into the dungeons is hugely problematic in ways I don't feel qualified to elaborate on. These are my two main criticisms of the film because honestly pretty much everything else about it I absolutely adore. The scene in the cemetery is peak High Gothica and it leaves me practically slobbering at the mouth and in tears every time (all of this? I die happy). Point of No Return is still a fucking trip to watch in the present because of how unsubtle it is regarding the fact that it's literally about fucking, but it was especially a trip to a sexually sheltered girl such as I was when I first saw this, so my mind kind of goes back to the state it left me in at that age; it was the closest I could get to softcore porn with my mother constantly breathing down my neck, and I thank Schumacher for his gift to teenagers everywhere regarding that sequence.

I love this gothic mad layer-cake. The end is still totally perfect, a sort of masterclass in heightened drama, from Point of No Return to Erik's rage at his unmasking (I love how Schumacher refused to make him truly ugly even then; gotta preserve the gothic beauty of it all, I respect that) and his demand that Christine choose Raoul's life or death, the beauty of the empathy in her kiss, straight to the end shot of Raoul seeing the rose with the ring on Christine's grave. A kiss blown your way with many a brava, Monsieur Schumacher.