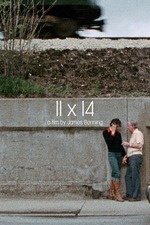 A relative Benning novice (I've seen and hugely enjoyed Los and RR, not so much Twenty Cigarettes), but various mutterings digital's sapped his rigor may have some basis. Slightly less magisterial than the films I've seen but no less compositionally acute, Benning's views of Chicago and the Midwest strikingly well-composed. (One shot — the view of a plane landing from a sidewalk just before the runway — is repeated with slightly more gravitas in Los.) Read up on before and after, but — some half-recognizable faces aside — the aggressively caesura'd narrative eluded me. (Though Jonathan Rosenbaum's Benning write-up from 1983 seems to suggest that watching 8 x 11 first would help a lot.) Staggering shots throughout, but to single out a few of the 65: a country road, the camera fixing its gaze diagonally to the right, panning abruptly left as a vehicle passes, flooding the frame with previously absent golden light and changing the entire color temperature; a long daylight ride on the Chicago El, a reading man's afro cutting out much central visual information (the center of the shot, but mentally displaced out of the physical space he's occupying), with viewers forced to look for clues on the sides until big downtown buildings loom too large in the background to be obscured; a much-returned-to gas station, depicted for the nth time after a long, disorienting shot of a parked gar at a filling station, obscuring the fact that it's the same station as before. In its own way, a very '70s movie: all the period trappings, lonely TV viewers (a woman reads with her back turned to Pillow Talk), outdated macho billboards (the Winston "I know my taste" guy in billboard form; a pointed tableaux of billboards, one advertising South Dakota's patriotic virtues with an image of Mount Rushmore, the other simply shilling Canadian liqueur Yukon Jack, two equally laughable images of virility), and Bob Dylan's "Black Diamond Bay" not once but twice.

Much of the momentum is created by an odd form of suspense. Where the shots in RR and 20 Cigarettes have clear beginning and ending points (a train's complete passage through the frame and one cigarette's complete inhalation), in much of 11 x 14 viewers are aware that something will definitely lead to the end of a shot, but what exactly is a matter of great suspense and frequent false leads. (Great wrong-footing of the viewer: nighttime gas station, barely seen, with passing cars in front. Suddenly, from behind the camera, a car lesses out and executes an over-hasty left turn. Cut.) Ends on a golf field as one man appears, makes his shot, and disappears down furhter into the field. Done? Not quite. One, then two, then three individuals come out and make their shots, then spread out in diagonal lines, radials covering the entire frame, to pursue their separate paths. Panicked, the camera slowly starts panning right, hoping to escape the humans and end the shot. Suddenly, alarming metallic-ish high-pitched noises caution the camera not to turn any further. Sensing danger, the shot simply, abruptly, gratefully ends.