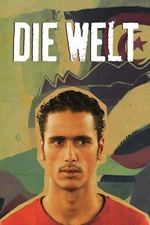 You should get on Facebook, protag's sister nags; "everyone in Tunisia is on Facebook." "Everyone in Tunisia is unemployed," he snipes back, then tells her she doesn't live in Tunisia, presumably meaning her head's in an internet cloud, oblivious to the social realities around her. Dude can't get a good job, so he works in a shop that burns (presumably pirated) DVDs on demand; in the opening scene, he gives a monologue to a customer asking for Transporters 2 about the film's imperialist tendencies, denigration and simplification of the Arab world, but for a while Alex Pitstra seems to be making a cash-strapped attempt at outdoing Michael Bay for sheer maximalism, swinging the camera around like it's Tree Of LIfe, cruising behind people's feet on the street and generally getting overexcited. (Yes, I just compared Malick and Bay, and I'm not really kidding.) The movie soon gets its effects under control, calms down, and becomes stylistically mutable and very funny about a not particularly funny situation/society. Smart about secular masculinity in the Arab world — irreligious but willing to take advantage of the authority still de facto ceded to men — with snatches of post-Jasmine Revolution change (conversations about how to maintain a secular society and what democracy might look like) not coming nearly fast enough. Scene that stuck with me: family goes big box shopping, counting every penny — dad buys one big bottle of Coke to split between him and his two kids — but at the check-out aisle sees a much richer couple buying a whole cart's worth of goods and trots off to get just one more item to add to his modest armful, a gesture of economic self-assertion that goes totally unnoticed by its target. Also the kind of movie in which someone can say "Europa is dead" and — rather than irritating you with the overweening generalization of the statement — have you wonder well, what's going on? Is that a legitimate judgment? Where's the world going? Big Picture thinking through a hapless young man's gaze, all in 80 minutes. You'll want to see this when you can.

Somebody Up There Likes Me