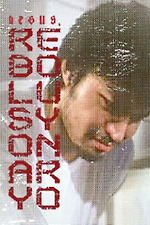 “The Philippine apocalypse is approaching!” screams a military commander, the in-a-nutshell warning of every Diaz film I've seen. This one's under two hours (!) and yes, dwelling on duration or lack thereof is Philistine territory (is it? At least two of the brightest viewers I know find it hard to barrel past two hours), but it's weird to watch Diaz try (?) to at least look like he's checking off the components of a standard action movie. The opening shots — night street, blue light, moody shadows — are pretty representative in terms of his images and pacing; ditto black-and-white imagery of a non-sexual woman in the Filipino countryside, more irritable but still as near-angelic as Jessica Chastain in Tree Of Life (the generic She is also in Batang West Side), and former poet Diaz has one of his works recited not once but twice. Pretty compelling stuff throughout — Diaz's gift/curse is in finding/executing a mid-tempo narrative groove — but there are also straightforward action sequences, involving guns being fired by people at other people, and these are filmed in the least exciting way possible. A charitable interpretation would be that Diaz is giving us the video art version of this film, a dry parody of commercial imperialist violent entertainments, making us question why we want to see such things in the first place; a less charitable interpretation is that he's simply bad at filming such sequences. And while format shouldn't matter, let's note that this was apparently shot in 35mm but at least for the moment exhibiting this is strictly a lo-res digital affair, which makes it look even more than necessary like you're watching a DTV action movie.